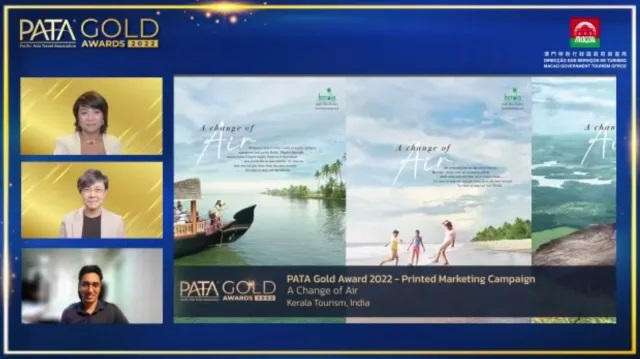 Kerala Tourism has bagged the prestigious Gold Award of the Pacific Asia Travel Association (PATA) for 2022 in the Printed Marketing Campaign category, in yet another recognition of the government's sustained efforts to position the state as a major global tourist destination.

“PATA Gold Award comes as a big honour for Kerala Tourism, which has stepped up efforts to market the state as a major global destination… The award comes shortly after Time magazine cited Kerala as one of the 50 extraordinary destinations to explore in 2022,” said Tourism Minister P.A. Mohammed Riyas.

"Our sustained marketing campaign has already started yielding results as the state has been witnessing a high footfall of both domestic and international visitors since the turn of this year," Riyas added.

“PATA Gold Award is a huge affirmation of the brilliance of our marketing campaigns when Kerala Tourism is poised to scale greater heights,” said K.S. Srinivas, Principal Secretary, Tourism.

PATA Gold Awards, now in its 38th year, recognize the best in marketing, creativity, and innovation tailored for the Asian-Pacific region and beyond. In tune with the changing industry trends and innovations, PATA updated the Gold Awards programme by introducing two new categories, Tourism Destination Resilience (Global) and Tourism Destination Resilience (Asia Pacific).

In all, 25 individual awards for specific themes were presented.