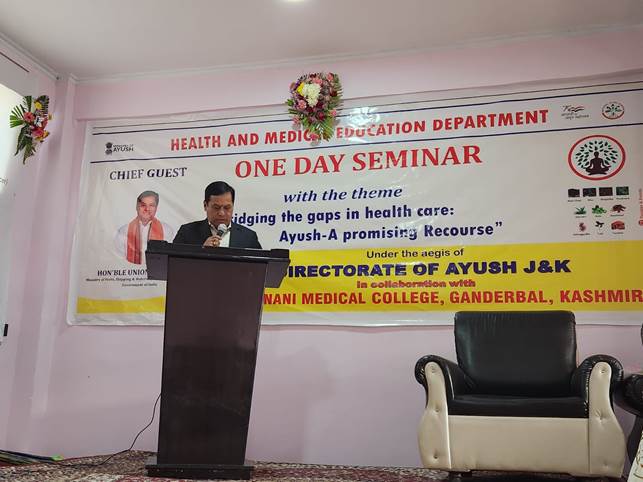 Ayush Utsav gets underway in Kashmir

The Union Ayush Minister Sarbananda Sonowal on Saturday launched the Ayush Utsav in Jammu and Kashmir, with an aim to enable the traditional medicinal practices to supplement modern patient care.

As part of the event, a seminar titled ‘Bridging the Gaps in Healthcare: Ayush, a Promising Recourse’ was held at the Government Unani Medical College & Hospital (GUMC) in Ganderbal, Kashmir.

The event featured the display of medicinal herbs, posters by the students as well as a video documentary by the Directorate of Ayush at the premises. A video documentary was also displayed to showcase the strengths & progress that the Ayush system of medicine has achieved in Jammu & Kashmir.

The minister also visited Manasbal park where he a started plantation drive within the park under the ‘Green Kashmir’ initiative.

Earlier, Dr. Mohan Singh, Director, Ayush, J&K, elaborated on the achievements of the department to make Ayush practices a household name across the union territory. AYUSH Health & Wellness Centers have been established and Yoga instructors have been engaged in all AYUSH Health & Wellness Centers for the promotion of health and Prevention of Diseases through Yoga Asanas, Dr. Singh added.