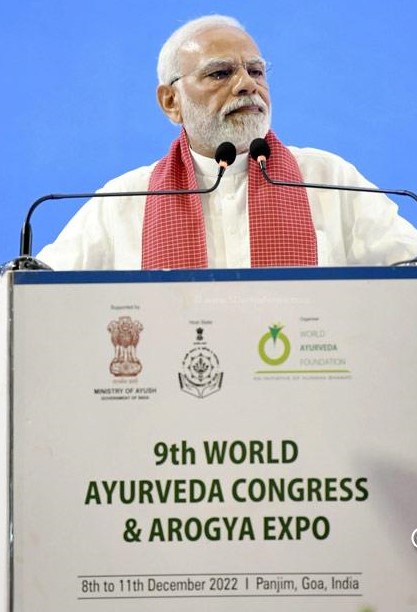 “It took so long for global consensus and acceptance regarding Ayurveda because modern science considers the evidence as the basis. We had results as well as effects as far as Ayurveda is concerned, but we were lagging behind in terms of evidence,” Modi said while speaking at the valedictory function of the four-day 9th World Ayurveda Congress that concluded on Sunday.

“And therefore, today it is imperative for us to do documentation of 'data-based evidence'. We have to work continuously for a long time in this regard. We have to bring our medical data, research, and journals together and verify each and every claim on modern scientific parameters,” he added.

The prime minister said the past few years saw the Government initiating efforts on a large scale in this direction, including the creation of the Ayush Research Portal for evidence-based research data.

“Taking that experience forward, we are now moving forward in the direction of forming 'The National Ayush Research Consortium'. Important research related to Yoga and Ayurveda is also being done in institutions like the Center for Integrated Medicine in AIIMS,” he said.

“I would like all the participants of the World Ayurveda Congress to come, collaborate and contribute with India to ensure global stature for Ayurveda,” the prime minister said.

“Today, India has also put forward a futuristic vision of 'One Earth, One Health' in front of the world. 'One Earth, One Health' means a universal vision for health. The health of water-dwelling animals, wild animals, human beings, or plants is interconnected. Instead of seeing them in isolation, we have to see them in totality. This holistic vision of Ayurveda has been a part of India's tradition and lifestyle,” he added.