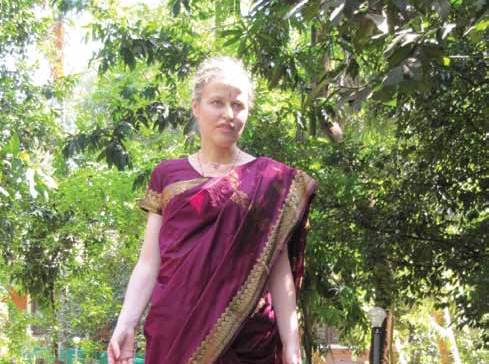 Ten years ago I was for the first time on my way to India. I had bought my ticket and was spending some time in Bangkok before I was going to set off on my journey. I was going to fly to Trivandrum and there I was planning to look for an ayurvedic centre to have some treatments at. Many friends were mailing me sounding concerned; their fears ranged from me risking food-poisoning, contracting an epidemic to being caught in the endless traffic snarls. In the end I chickened out, and headed to China instead to spend some time with Master Lu, a martial arts teacher and acupuncturist that a friend of mine knew of.

Five years later, in 2006, I spoke to my friend Salla and asked her if she might be willing to come to an ayurvedic centre in India with me. After getting a positive reply from her, I started to search for a good ayurvedic place for us to have treatments at. I had no idea how many were there until I googled ’ayurveda in India”. I felt like I ended up in a jungle. However after spending several hours a day, a few days in a row on the internet I repeatedly returned to the website of Nagarjuna. Not because it was such a good or beautiful website but because my gut feeling was telling me that I might find the ”real thing” there. I found that there were several wellness centres or spas but not many serious ayurvedic clinics.

I wrote an email to Nagarjuna with many complicated questions and queries with regards to muscular dystrophy and received a very good answer from Dr Krishnan Namboodiri, at that time chief physician at the Kalady centre. I was satisfied and was hoping that the place would be what I was looking for.

I got diagnosed with a musculardystrophy at the age of 18 and according to my diagnosis I was likely to be in a wheelchair already by the age of 30. By changing my life style, doing meditation and some yoga and qigong I had been able to stop the progress a bit and was still walking with a stick as I arrived in India the first time. The muscle bulc was however all the time slowly getting smaller, my muscles were atrophying. There was no cure for this in the West. I also had a very poor digestion and had been under weight for all of my life without being able to put on weight.

I felt very nervous as we were setting off on our journey with Salla in early 2007. I remebered what my friends had said the last time and now there were just as many warning me again. As soon as we arrived in India and had spent a few days at the Centre, I knew that my worries had been unnecessary. I was met by people with a lot of warmth and knowledge of the body, and not just knowledge of the body as a separate entity but knowledge of how the human being as a whole was constructed of both body, mind and spirit and how all illnesses were a combination of causes found in all of these different parts. I was also very well taken care of by the staff, and the friendliness here is one that I have not found somewhere else in the world.

My digestion started to balance after the very first course of treatment. I made it a point to come back every year. Now, after five years with treatments once a year, my digestion is more or less normal. I have put on weight; in fact, for the first time in my life, the weight stays at normal levels. Ayurveda is the first means of treatments that has been able to enhance a regrowth of muscle bulk in my body, something I myself thought was unlikely to happen. My physiotherapist in Finland says that she has never really heard about something like this in a case like mine.

I am still walking with a stick, but all progress, even though maybe for an outside and untrained eye small, is big in my case. It is also such a wonderful way of getting better. What could be more pleasureable than lying in a dim room with only a lamp lit in front of a small shrine and being massaged by two pairs of skilled hands, or having six liters of oil being pored over you from small coconut shells with holes at the bottom? Over the years all of the different members of my family have accompanied me here and undergone treatments here. My father and mother very much enjoyed their time in India and received general well being from their treatments. My father still recalls all the vivid talks he had with Dr. Manoj Kumar, the current chief physician, and he was highly impressed by the knowledge of the doctors. Both of my sisters also really enjoyed their stays.

My sister Nillas legs that were very stiff on arrival got much softer and more flexible and my other sister Helenas high blood pressure normalised within the three weeks that she underwent treatments. My sister Helenas’ two daughters who were along one time still talk about their time in India and wish that they can come back here another time. The word has also spread amongst my friends and many have joined me over the past years for longer or shorter stays here. We have enjoyed joint talks at a balcony by the river side, walks in the afternoon, small shopping trips and many nice dinners in candle light at somebodys veranda.

I have been trying out many different cures over the years and nothing has proved to be as effective as the treatments that I have undergone here in Kerala. I have not tried ayurvedic treatments in other parts of India or outside of India, but my feeling is that Ayurveda will be best in the country where it originated. As soon as certain forms of treatments are moved to another part of the world with for example a different climate some of the original strength in most cases will be lost.

I am again and again impressed by the effectiveness of the medicines and ointments within Ayurveda. No matter what the complaint might be there seems to always be an effective way to deal with the problem.
And what I like the most is that the medicines are one hundred percent natural. I can highly recommend a course of ayurvedic treatments both for those that are suffering from some form of disease and also for those that are just looking for a way of improving their general health and receiving some rejuvenation. It’s not just the treaments and all the wonderful people here that make me come back every year, but India as a whole. This country has grown on me and each year that I come here I sit down at a bench by the river side, listen to the temples and the sounds of all the insects humming at the fall of the evening and feel like I am once again at my home away from home.

In the West true generosity is a scarce thing these days and spirituality is something that has been pushed out from the main roads of society. Here there is still a natural and not forced warmth within most people and it seems to me that people live more from their hearts than their heads in India. So each year as I arrive I take a deep breath, let out a sigh and think, wow, three months here again, I must be the luckiest woman in the whole wide world!