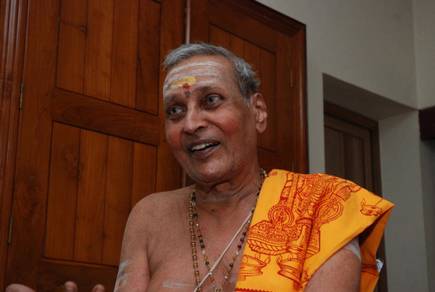 Legendary Ayurveda practitioner and an advocate of Kerala’s Ayurvedic tradition Vaidyamadham Cheriya Narayanan Namboodiri passed away on 18th October (Friday). An expert in detecting Maranalakshana (the signs of death), his daring act of bringing back many complicated treatments like Kutipraveshikam had gained him acceptance all over the world.

Born to Ashtavaidyan Vaidyamadham Valiya Narayanan Namboodiri and Unnikkaali Antharjanam on April 10, 1930 Namboodiri had learnt Sanskrit from Vaishranavath Raman Namboothiri, V K N Thirumulpaad and Kalakkath Raman Nambiar. He began learning Ayurveda under the tutelage of his father in 1950, and by 1981 the vaidyasala was upgraded to the Vaidyamadham Nursing Home with in-patient facility. In 2003, the nursing home received the GMP certificate. A specialist in treating patients with arthritis, Cheriya Narayanan Namboodiri devised two tablets for treatment of cancer as well. It was believed that he could diagnose the disease merely by seeing the patient and could treat illnesses that were tagged incurable by modern medicines. He has authored 20 books related to Ayurveda and literature and won the Kerala Government’s “Ayurveda Acharya” award for contributions to the field of Ayurveda.

Namboodiri is survived by his wife Shantha Antharjanam and children Narayanan (MD at Vaidyamadham), Neelakantan, Dr Prasanna, Latha and Dr Vasudevan. The body was cremated at his residence at Mezhathur.