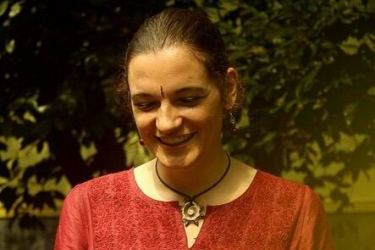 When she came to India for the first time, Carina Miorin had no clue her life would take such a different turn in the coming years. It was in 2005 that she visited Tamil Nadu and Kerala for voluntary service as part of her studies. A student of Cultural Anthropology and Indological studies then, Carina went back to Germany, her homeland, only to return in 2007 and pursue studies in Ayurveda. “It was obviously a tough call, especially convincing the family,” says the German national who completed Bachelor of Ayurvedic Medicine and Surgery (BAMS) course from Sree Narayana Institute of Ayurveda Studies and Research in Puthur, Kollam.“I kept reading books in Ayurveda, particularly the ones written by Dr. Robert Svaboda, the American author and Ayurvedic doctor.”

Traditional medicine, however, wasn’t new to the family as they have always resorted to alternative healing methods. “We do not go to doctors that early. I have never seen my dad go to the doctor,” she recounts with a smile. Nevertheless, dropping out of the university (Hamburg University) to proceed with academics and a career in Ayurveda did stoke apprehensions, she adds.

Ask her how and why she chose Ayurveda, Miorin has a mouthful of reasons , and she has no regrets.
“This science is amazing. There is no answer that you cannot find in these texts. I never imagined it was this vast, ” she replies. Yet the syllabus, she finds disagreeable. “I was overwhelmed initially. There is so very much to memorize.
It gets to a point where you may not know what something is, but you may have already studied it.” says Carina who, in spite of unfriendly academic situations, topped the Sanskrit exam.

“Well I had to give my heart there, working day and night over the portions,” she laughs while recollecting how tough it was to learn. “Often I had this worry whether I would really pass the exam but somehow I managed,” she says.
Introduction to Sanskrit, what she had studied along with Indological studies, did help much, with the letter and grammar. While Ayurveda has mostly been taken abroad for the possible revenue it could gross, Carina feels it is the idea that has to be exported, not the medicine. “Life should start healthy and this field offers much there,” she says. “It can make an individual blooming and as well remove the illnesses”.

But when it comes to practicing in Germany, one is expected to cross hurdles. “I am afraid I am going to lose what I learnt here because of the restrictions, especially being in a field where you learn as you practice. BAMS isn’t enough, but an equivalent course to get the license has to be cleared. And the health insurance there does not cover the treatment costs. Moreover, importing the medicine seems to be quite a task,” says she who feels dutiful about spreading the importance of Ayurveda. “It has to be taken across as it is worth it”.

Kerala: Vegetation, the flora-fauna, climate, lush greenery and people! “I have always felt close to the culture, people and climate. However, living here is very different from the ‘idea’ of living here. It was initially impossible to remember the place names but now that I have been here for quite some time, it is fine.” After the one -year internship, she now stays in Tripunithura, one of her favourite places, near an Aaryavaidyasala.

Malayalam, again, was yet another constraint but five years ‘ intermingling has taught Miorin enough to communicate. “I know the basics of the language, to talk. It depends on who is on the other end. With the ones I know, it is pretty manageable but if it is an old man with no teeth, I can’t!,” laughs the Ravensburg-native who, incidentally, loves to eat Puttu and Idiyappam the most.

Although her love for studies took her all the way across the continent, Carina feels what is important is the experience than any formal education, hence had no grievances after she had to repeat a year in school following a foreign exchange program to the US.

Apart from the unorthodox passion, Carina has conceived love for music and travel as well. She had surprised the lot after winning the first prize for a flute rendition in the Western music category at the Ayur Youth Festival in Cherthala. “I had wanted to go for music therapy after high school but dropped the idea of music as a profession as it isn’t really the best way of choosing a livelihood”. Carina’s brother is a drummer, based in London.

Yet another craze, travelling, had taken her to Europe, the US, Mexico, Bolivia, Peru, Nepal and other places . “This time I went for the Kumbh Mela. An incredible experience it was, ” says Miorin who prefers travelling alone. Pursuing a dream is indeed industrious, especially in an otherwise inhospitable terrain. So for all the ones who would like to go far with their passions, Carina Miorin is a lesson.

As of now, the thirty-year old is busy with the yoga teacher training course in Thiruvananthapuram, preparing herself for a profession that she would like to undertake after getting back. “It is important to do what you love,” she says.