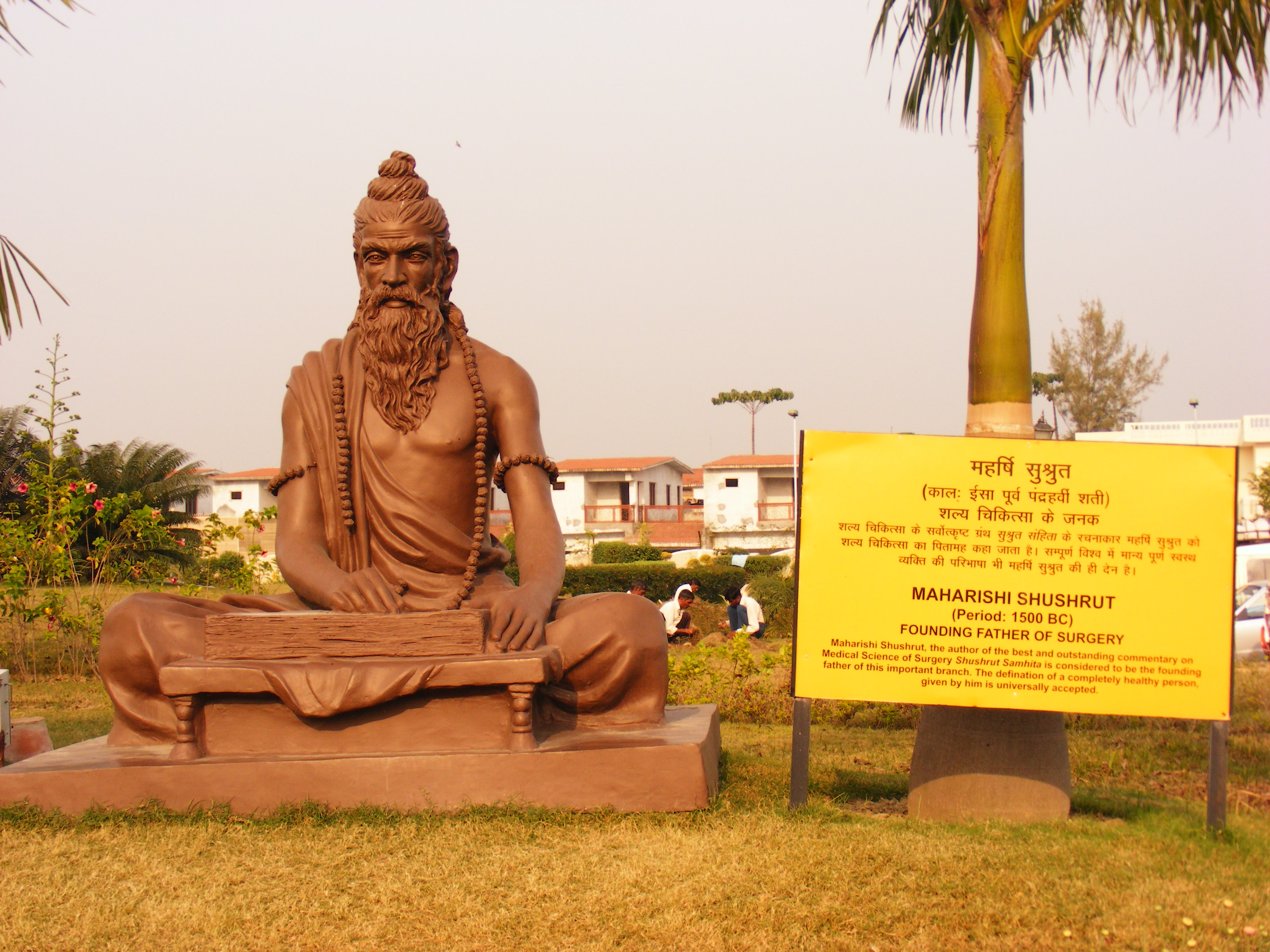 Contributions of Susruta, the Father of Indian Surgery

The existence of Ayurveda has been recognized since time immemorial. Vivid descriptions about this form of medicine are seen in Rig Veda and Atharva Veda. It is believed that Lord Brahma was the originator of Ayurveda, the Science of Life, which had two different schools i.e. the Atreya School, which deals with Kayachikitsa (General Medicine) and the Dhanwantari School ,which deals with Shalya (surgery). Susruta was regarded as one of the most intelligent disciples of Divodas Dhanwantari, therefore, he preached his scientific knowledge of Shalya to his disciples, particularly addressing to Susruta. There is difference of opinion among scholars about the age in which Susruta lived. Some scholars put him quite early in BC while others take him in the Medical Period.

The most outstanding performances of Indian surgery, however, were in the domains of transplantation of organs, plastic surgery, Lithotomy, Laparotomy etc.

There had been several instances where the severed parts of the body were transplanted with great success. Implantation of artificial metal leg, restoration of broken teeth, eye- enucleating and corneal grafting to restore vision etc. were carried out by Indian surgeons in the past. Moreover, plastic surgery was on high peak during the ancient era. Susruta, the father of Indian surgery, has described the scientific technique of Rhinoplasty and Otoplasty (repairing of severed nose and lobes of the ear) in his Treatise of Susruta Samhita. It is evidently true that modern surgery throughout the world has got inspiration from the ancient surgery of Susruta and it has been quoted by Hershberg of Germany that ‘our entire knowledge of plastic surgery took a new turn when these surgical techniques of India became known to us.”

However it indicates that Indian surgeons were highly trained and proficient in performing the major and complicated surgeries. In brief, these contributions by Susruta have inspired the scientists of the 20th century to realise the significance of transplantation as well as plastic surgery practices in the 6th century BC or even before.

hidden treasures of surgery practised in the past. An attempt will also be made to investigate the valuable materials of immense importance pertaining to surgical literature available in Vedic and Post- Vedic periods. Indians believe the science of Indian medicine to be divine as Lord Brahma was the patron of the leading art, Ayurveda. It has always been a matter of speculation how the ancient surgeons ever carried out major surgeries successfully in the absence of anaesthesia, haemostatics, antiseptics and antibiotics. However, knowledge of anatomy was requisite to Indian surgeons as evidenced by the concept of Marmas (Vital points) 107 in number mentioned by Susruta based on regional anatomy so critical to any intelligent surgeon and this needs further exploration. Indian surgeons were quite aware of the infections following surgical operations and they accorded top priority to prevent infections in such cases. It was surprising how they used to prevent and manage the infection in the absence of antiseptics and antibiotics. It is to be further highlighted and explored with regard to the ways and means adopted by the surgeons in the old days of Susruta. Shalya is the name applied to the art of surgery in Ayurveda. The foreign bodies of all kinds were denoted ‘shalya’. But it specially refers to the arrow which was the commonest and the most dangerous foreign body causing wounds and requiring immediate surgical interference during the Aryan invaders. Thus in Rig Veda, amputation of legs and fitting with artificial metal limbs, extraction of arrow from the wounds, corneal grafting to restore vision etc. have been elaborately described. The clinical approach and major surgical operations of certain serious abdominal diseases i.e. peptic ulcers, perforations etc. mentioned by Susruta have provided a new light to modern surgery. Moreover, Susruta has described various means of blood-letting (Rakta Moksha) employing several methods for the treatment of critical diseases, i.e. blood pressure, sciatica and several nervous disorders. It was most common during the ancient era and more than 50% of the diseases were cured by Siravedha (venesection), cupping and application of leeches which have been quoted in the ancient book of surgery- Susruta Samhita.

Similarly, Agnikarma (cauterisation) was considered even more efficacious than caustic. It was mostly employed to eradicate tumors, fistula, haemorrhoids, elephantiasis and several nervous disorders and requires further explanation in view of modern light.

The most exciting surgery of transplantation of organs was highly prevalent and practised in the past. Transplantation of head, kidney and other vital organs were successfully carried out in the past by Indian surgeons, Aswini brothers and others. However, the ancient technique, methodology and immunesuppressive agents to prevent the rejection of transplanted organs etc. need further explanation and investigation available in the Vedic and Post- Vedic periods in Sutra form. In addition to the above noted details, the scientific approach to perform Rhinoplasty and Otoplasty in the 6th century BC will be explored and highlighted considering the significance and importance of the subject in modern perspective.

Susruta has emphasised on the clinical application of Kshara- Sutra in patients suffering from fistula, haemorrhoids with great success. Even at present, alkali prepared threads (Kshara Sutra) are widely used by the Indian surgeons. The details of the technique as well as the scientific approach need to be studied further as it is less time consuming compared to modern surgery.

The fundamental concepts and contribution of Susruta on the management of fractures and dislocations have covered all aspects in such a scientific way that even modern surgery has adopted almost the same principles without much alteration. It does indicate that Indian surgeons in the past had supremacy pertaining to orthopaedic surgery. The emphasis will be given on most of the outstanding contributions of Susruta on ancient surgery practised in the past