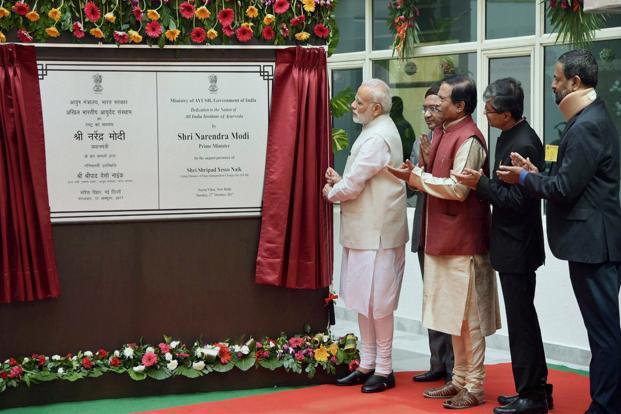 Prime Minister, Narendra Modi inaugurated the All India Institute of Ayurveda (AIIA) in New Delhi on October 17. Tuesday was the National Ayurveda Day. He stated while inaugurating the AIIA at SaritaVihar, New Delhi that the government wanted the poor to get access to India’s healthcare system and that we should respect all healthcare systems and expect for all to grow and flourish. The Prime Minister said that the government is working towards establishing an Ayurveda hospital in every district of the country. More than 65 AYUSH hospitals have already been developed in the last three years, he added. He said the government has shown its commitment by talking about integrating Ayurveda and allopathic medicine in the National Health Policy. AIIA, built on the lines of AIIMS, has an NABH-accredited hospital and an academic block. The hospital will provide outpatient services and free medicines.It will have a total campus area of 10.015 acres and a budget of Rs157 crore. AIIA, under the AYUSH ministry, is aimed at bringing synergy between the traditional wisdom of Ayurveda and modern diagnostic tools and technology. Subscribe To Read Full Article.....