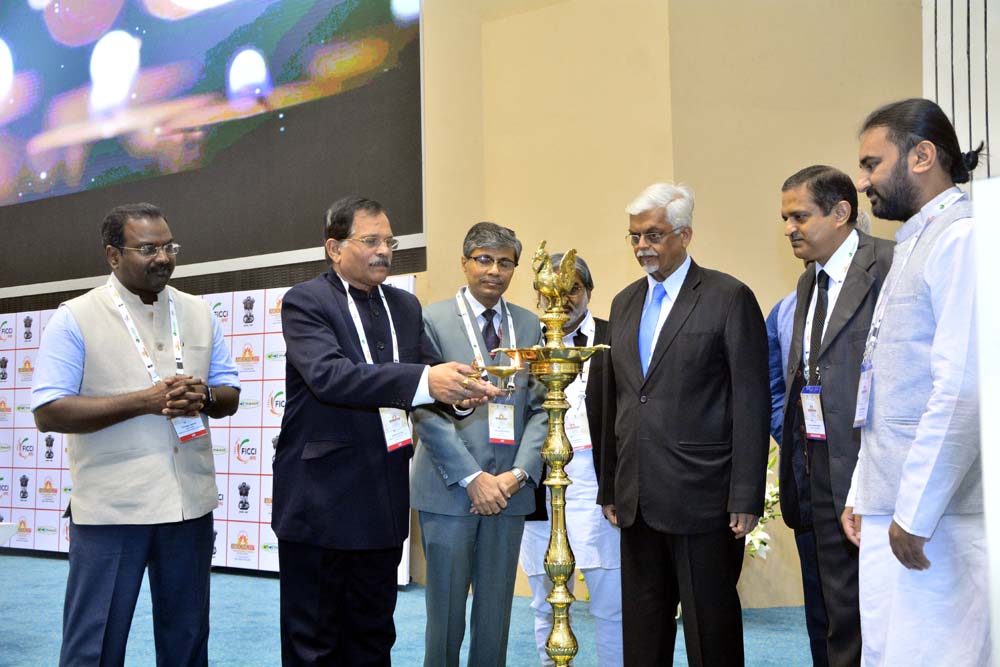 The first International Exhibition and Conference on AYUSH and Wellness sector – AROGYA 2017 concluded in Delhi on 7 December 2017. It was inaugurated in Delhi on December 4 by AYUSH Minister Shripad Yesso Naik and Suresh Prabhu, Minister of Commerce & Industry in the presence of Vaidya Rajesh Kotecha, Secretary, Ministry of AYUSH; Dr. Sanjaya Baru, Secretary General, FICCI and other dignitaries.

The main theme of the event was “Enhancing the global potential of AYUSH’. It was organised by the Federation of Indian Chambers of Commerce and Industry (FICCI) in collaboration with the Ministry of AYUSH and Ministry of Commerce & Industry and Pharmacueticals Export Promotion Council (Pharmexcil).

The conference witnessed participation of delegates from India and over 60 countries. More than 250 manufacturers of alternative medicine also showcased their products and services at the exhibition. The event was held in the backdrop of the National Health Policy 2017.

During the course of the event, Suresh Prabhu, Minister of Commerce & Industry  stressed on mainstreaming the Indian System of Medicine and integrating the AYUSH infrastructure into the healthcare system to tap the maximum potential of AYUSH systems in imparting preventive, promotive and holistic healthcare to the people.

Talking about the India opportunity, Prabhu said, “The Indian domestic market of AYUSH is estimated to be Rs. 500 crore, while exports amount to Rs. 200 crore. Young entrepreneurs planning a start-up could find a lot of opportunities in holistic healthcare. The government has allowed 100% FDI in AYUSH. The AYUSH industry is expected to grow in double digits and provide direct employment to one million people and indirect employment to 25 million people by 2020. All stakeholders need to pool their resources to harness this vast potential.”

Shripad Yesso Naik, Minister of State (Independent Charge), Ministry of AYUSH, said, “The patient-centric approach of AYUSH systems holds significant potential for finding solutions to India’s public health challenges. The government has taken many initiatives to popularize alternative systems of medicine. The National AYUSH Mission was started in 2014. An agreement has been signed with WHO to develop benchmarks for Yoga, Ayurveda, Unani and Panchkarma. Five AYUSH information cells have been set up in Israel, Tajikistan, Peru, Russia and Tanzania. The All India Institute of Ayurveda has been established at Delhi.”

A White Paper “AYUSH for the World” by Frost & Sullivan was launched at the event to offer a roadmap for AYUSH regulations and registration in ASEAN and BIMSTEC countries. It notes that India has the potential to generate 3 million job opportunities. The Indian herbal market is valued at around Rs. 5,000 crore currently, with an annual growth rate of 14%. More than 30,000 branded and 1,500 traditional AYUSH products are available in the country.

A major highlight of International Arogya 2017 was Indian CEOs’ Roundtable, chaired by Shripad Yesso Naik. The event hosted sessions built around themes like: Enhancing the export potential of AYUSH; Business opportunities in integrative healthcare; Building a brand strategy; Standardization and quality control in AYUSH sector; and workshop on essential herbal raw materials required in AYUSH industry. There was also a meet of international regulators, with regulators from ASEAN and BIMSTEC countries, Canada and Switzerland participating.

Key objectives of the conferance