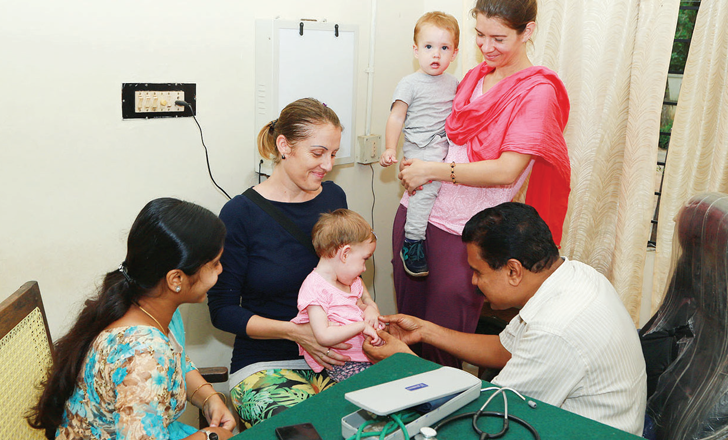 Baby Victoria left Hungary for Idukki when she was barely one-and-a-half years old. Since her delivery was premature (being born in the 24th week) half her body remained paralysed and she could not speak.

Here, it was Ayurveda treatment that helped this toddler to get back her movement and speech. Thus, this happy family left back for their homeland when their baby was three-years-old and was able to move and speak.

Baby Victoria is the daughter of Imrain Markose and Monica of Hungary. Within a week after her birth the left side of her body got paralysed. Subsequently, she was diagnosed with problems in her brain, respiration and heart.

The treatment in Hungary was not successful. It was during this period when they were almost losing hope that that they happened to meet a Tamilian doctor named Mahimaraj who told them about the Ayurveda treatment in Kerala.

On reaching Kerala, Baby Victoria sought treatment from Dr. Suresh who was practising at the Government District Hospital at Paremavill. Later, Dr. Suresh got a transfer to the District Ayurveda Hospital in Thodupuzha as Chief Medical Officer. To continue her treatment, Victoria and her parents too moved to Thodupuzha. In two years’ time, there was significant changes in Victoria who was treated in four sections for two years.

Today, Victoria is able to move her hands and legs and say ‘mom’ and ‘dad’ in Hungarian language. There is also improvement in the movement of her neck.

Now, the happy family have left for Hungary carrying with them medicines for the next six months after which they will return to Kerala for continuing treatment in November.