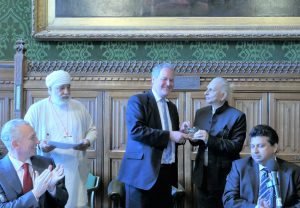 Sri M is a modern Yogi with a mission to inspire mankind towards peace and harmony. He picked out three key qualities of mind described in the Bhagavad Gita as being characteristic of the man established in Yoga.

First, having the senses under the control of one’s mind; second, having one’s mind tranquil under all circumstances, e.g. not bothered by the opinions of others, whether these are flattering or critical; and third, having the welfare of all beings in one’s heart.

He pointed out that Yoga Asanas (postures) are known to have an effect on the endocrine system but added that Yoga is more than just physical exercises.

Bob Blackman, MP, co-chair of the APPG, was delighted to say that Yoga is to some extent now recognised by the National Health Service.

The meeting celebrated the fourth UN International Yoga Day and 70 years of the NHS. It was co-hosted by the APPG on Indian Traditional Sciences, the Indian High Commission and Sri Lankan High Commission