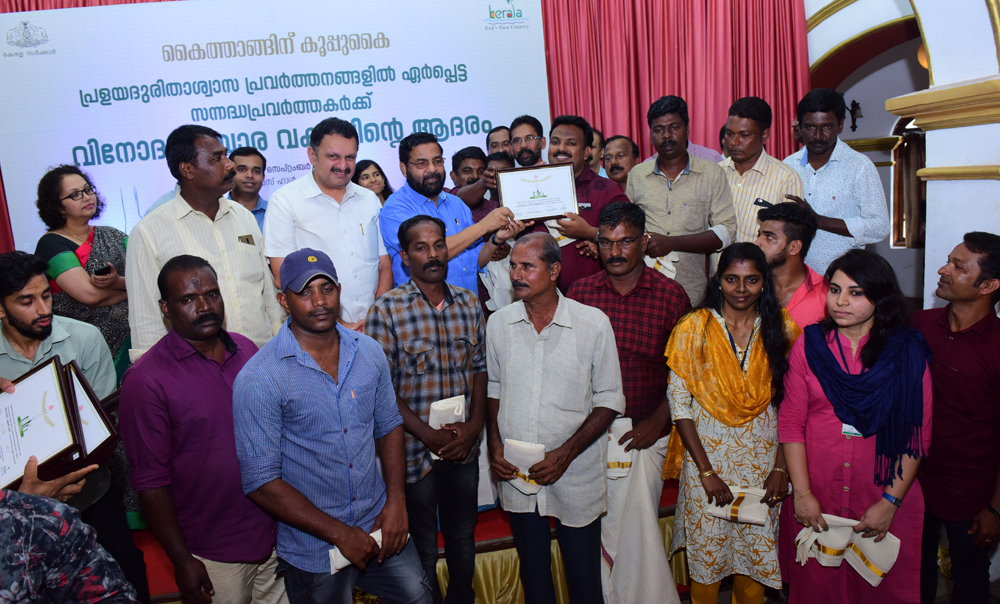 Restoring roads to tourist spots to get priority: Minister

Minister of Tourism Sri Kadakampalli Surendran honouring the Tourism Personal and Life guards who actively took part in the rescue and rehabilitation with Certificate of Appreciation .

The Minister was speaking at a function here to honour tourism sector personnel, including life guards and boat drivers, who plunged into the rescue and relief operations during the devastating floods that hit Kerala recently.

“The major challenge faced by the tourism sector is damage suffered by roads connecting tourism destinations. The Government, however, is giving top priority to rebuilding these roads,” the Minister said.

The function, “Kaithanginoru Kooppukai,” was organised by the Kerala Tourism Department.

Apart from commendable services rendered by the tourism personnel in helping the affected communities the businesses and service providers from the sector had also pledged generous help to the rehabilitation process, he said.

“The tourism trade has played a commendable role in the rescue and rehabilitation operations, which needs to be applauded,” Sri Surendran said.

He said it was due to the efforts of the public and private sector that the Kerala Tourism could earn a great reputation across the world.

Sri K. Muraleedharan, MLA, who was present on the occasion, lauded services of youngsters at the hour of crisis.

Tourism Minister Shri Kadakampally Surendran felicitated those who rendered commendable service during the flood, at a function held at Kanakakunnu Palace here at 4pm on September 3.

Boat drivers and staff of the Kerala Tourism Development Corporation (KTDC) and District Tourism Promotion Councils (DTPC)  and those who plunged into the rescue operations under the banner of various organisations in the tourism sector will also be honoured at the function.