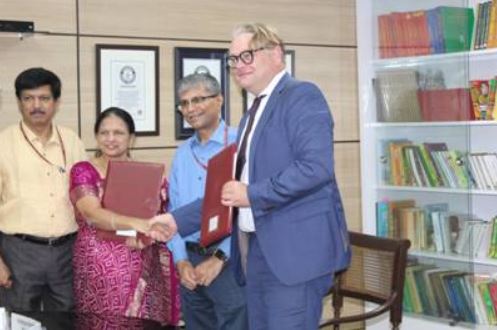 A Memorandum of Understanding (MoU) was signed between All India Institute of Ayurveda (AIIA), under the Ministry of AYUSH, and Germany’s Innovationszentrum Biotechnologie GmbH (FiZ) in New Delhi. The MoU was signed by AIIA Director Professor Tanuja Nesari and Dr. Christian Garbe, Managing Director of Frankfurter Innovationszentrum Biotechnologie GmbH (FiZ).

This MoU was signed with an objective of enhancing collaboration in the field of Genomics research. As per the agreement, several scientists will work together as a team from both countries. A team of scientists will develop evidence-based guidelines supported by modern technologies such as Artificial Intelligence (AI) and Machine Learning (ML).

Importance of the MoU

• An MoU between AIIA and German institution will integrate practices and principles into modern medicines.• Both countries will exchange their expertise, knowledge and experience through collaboration.• The use of traditional Ayurveda medicine as a supplement with traditional concepts of biotechnology is expected to generate new evidence that will help contribute even more to global health care.• Since Ayurveda is a time tested medicine and modern medicine work on scientific principles, it is believed that a combination of both can ease the medicinal processes.