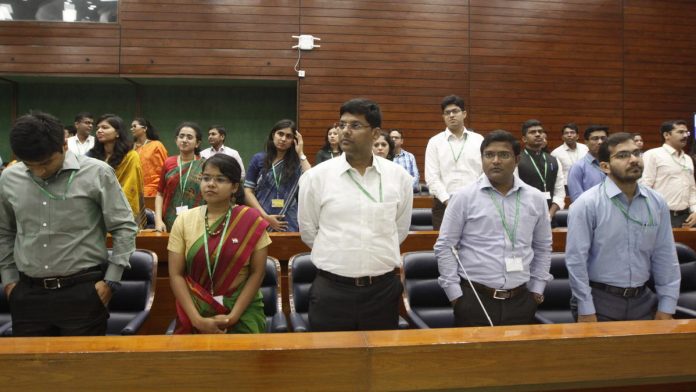 New Delhi: Stress management, ancient wisdom to find fulfillment, and yoga asanas — these are some of the things top Indian Administrative Service (IAS), Indian Police Service (IPS) and Indian Forest Service (IFS) officers learn at Sri Sri Ravi Shankar’s Art of Living Foundation under an agreement between the organisation and the Department of Personnel and Training (DoPT).

While short-term training programmes for top civil servants in Delhi have been going on for a few years now, the foundation is now seeking to expand the scope of the lessons to officers of other designations who are posted across the country, Commodore H.G. Harsha (Retd), CEO of the Art of Living Social Projects, told The Print.

“The association between Art of Living and the government is not new… We have been providing courses for government staff, including IAS and IPS officers, for many years now,” he said. “But we are looking to expand the scope of training to railway officers, those in other states, armed forces, the police, etc as well.”

For civil servants, the foundation offers five-day training programmes at its centres. Around 40-80 officers can take part in these programmes in one go.

Typically, the courses are offered to all officers of the All India Services who have spent at least four years in government service, right up to those serving in the rank of union secretary.

According to Harsha, the last training session for civil servants was conducted in November this year. “While we provide training to government staff at all levels, we group senior officers (above the rank of joint secretary) together so that they can be guided in a similar manner.”

He said officers in the programme are exposed to real-life case studies to help them learn about ways of dealing with stress, focusing on faster work delivery, and not getting influenced by other people’s emotions.

“There is a perception that, in the government, there is no stress, and people do not perform to their full potential,” Harsha said. “But this could not be farther from the truth… There is immense pressure to deliver in the government as well, and we seek to help and guide government officers to deliver better.”

Harsha, however, clarified that there isn’t any ‘spiritual element’ in their training programmes. “The focus is on ancient wisdom imparted by our Guruji (Sri Sri Ravi Shankar), pranayam, yoga, sudarshan kriya, etc.”

Several such courses are empanelled with the training division of the DoPT and the five-day lessons with the foundation are just one of them.

A senior IAS officer who participated in the foundation’s training course in 2017 said it is of immense value to those engaged in public service and has no religious undertones.

Even though the foundation has clarified that there isn’t any religious aspect to these courses, some civil servants claim otherwise.

According to a second senior IAS officer, even if the government didn’t intend it to be thus, the spiritual and religious undertones of the organisation are “well-known”.

“To send government staff for training to an organisation whose spiritual undertones are so well-known is not appropriate to my mind,” the officer said. “But if officers have benefited from the training and it is ensured that there is no religious and spiritual sermonising done, then it is up to the officers concerned whether they want to go or not.”