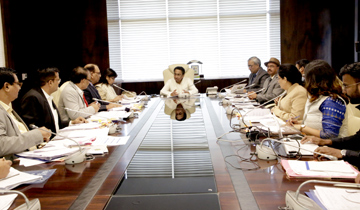 AYUSH wing to be set up in all medical colleges of MP, says CM Kamal Nath

Bhopal : Chief Minister Shri Kamal Nath issued instructions to set up AYUSH wing in all medical colleges of the state. While reviewing the AYUSH Department at the Mantralaya today the Chief Minister said that the inclination of general public towards AYUSH medical system has increased of late but people are unable to reap benefits from it due to lack of development as expected. Kamal Nath told to make a target-oriented work plan in the coming month and prepare a time-bound programme for its implementation. Medical Education and AYUSH Minister Dr. Vijaylaxmi Sadho was present in the meeting.

Chief Minister Kamal Nath said that there are extensive possibilities in AYUSH medicine system in the state. The state and citizens have not able to avail its benefits due to its limited exploitation. He also directed to encourage wellness tourism in the state. Kamal Nath said that today there are many disciplines in traditional medicine like Panchkarma Yoga, which make a person physically and mentally healthy as well as diagnose serious diseases. He said that an action plan should be prepared in this regard and provide opportunities to private sectors.

The Chief Minister directed to send a team of AYUSH department to leading countries in the world like Germany for homoeopathy and China for Herbal Medicine to promote research and development activities in AYUSH system in the state. He said that this team should also explore the possibilities of MoU in this medical system. He directed to obtain patents and record research and development in respect of various methods of AYUSH and developed medicines in the state.

The Chief Minister asked the Department of AYUSH to publish books on various types of health related information, Ayurvedic remedies and medicinal plants related to Indian system of medicine. He told to get these books translated into English and make them available for publicity in all places like tourism information centres, hotels and private hotels.