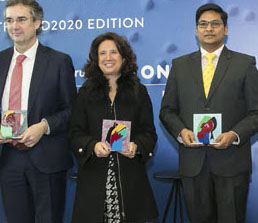 The Kerala government has received praise from the United Nations World Tourism Organisation (UNWTO) for its ‘Barrier Free Tourism’ initiative.

Thrissur, cultural capital of the state, received a special mention as an “Emerging Global Destination” in the ‘Accessible Destinations Awards 2019’ instituted by the UNWTO.

The South Indian state is the first one to work as per the UNWTO guidelines on making tourist destinations disabled-friendly.

Kerala Tourism Director P Balakiran received the award from UNWTO Secretary-General Zurab Pololikashvili during the ‘FITUR Trade Fair’, a meeting point of tourism professionals from across the globe, held recently in Madrid.

The first recipient of the “Accessible Tourist Destination” award was Portugal, while Spanish city Barcelona also received special mention along with Thrissur.

Tourist spots in Thrissur including the beaches of Azhikode and Snehatheeram, the hills of Vilangankunnu and the scenic dams in Poomala and Vazhani were all made disabled-friendly.

Kerala Tourism Minister Kadakampally Surendran announced in October 2019 that 98 out of 120 tourist spots had been made disabled-friendly as part of the first phase. Thrissur was among the first cities selected for the project implementation.

UNWTO hosted Accessible Tourism Destination Awards to recognize destinations that are proactively opening themselves up to tourists of all abilities and backgrounds.