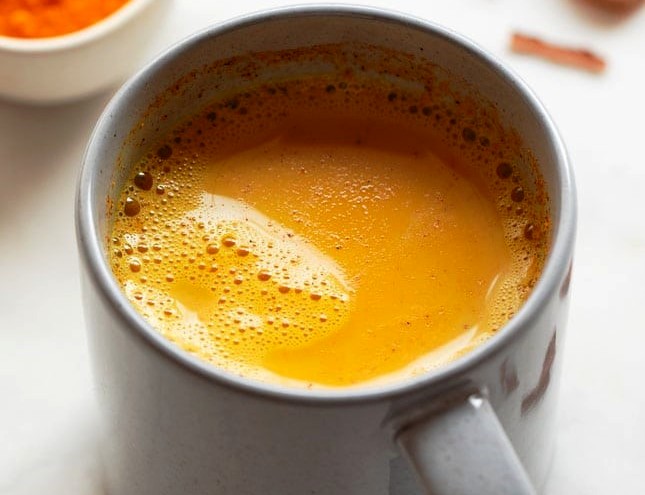 Turmeric, the ‘Golden Milk’ in Ayurveda

For the past few months, we have been hearing often about ‘Golden Milk’. Be it the immunity-enhancement advisory of the AYUSH Ministry or the immuno-modulators advocated by noted Ayurveda practitioners, all have mention about it. Milk processed with turmeric is called ‘Golden Milk’, the name having been derived from its colour.

Most of us are quite familiar with turmeric as a spice commonly used for cooking. However, Ayurveda refers to it as having excellent medical properties. The traditional medicinal system recognises it as one of the best anti-bacterial, anti-microbial and anti-parasitic drugs.

Turmeric (Curcuma Longa) belongs to the same family as that of Ginger – ‘Zingiberaceae’. Its roots (rhizomes) are commonly used, though leaves too are collected by people for steaming certain food items. The roots, cleaned in warm water, are dried properly and grounded into fine powder, deep yellow in colour. The powder is not only used for consumption but also as a dyeing agent.

In Ayurveda, turmeric is known as “Haridra” and is used for medicinal preparation, either as a combination drug or as a standalone one. Turmeric contains various phytochemical components, mainly a class of curcuminoids such as curcumin, which gives it the antifungal, anti-parasitic and anti-inflammatory properties. This is why it’s mainly used in cooking and also for cleaning vegetables to remove any leftover pesticide content.

The golden colour, pleasant smell and peculiar taste all makes food delicious. It acts as one of the best anti-oxidants (by resulting in increased production of transcription factors which in-turn trigger genes to make antioxidant proteins) and keeps allergies and skin infections at bay upon regular use.

The far-reaching effects and multiple targets of curcumin on cell growth regulatory processes hold much promise as a potential chemotherapeutic agent for many types of human cancer. For instance, its controlling effect on various transcription factors, oncogenes and signalling proteins. It acts at various temporal stages of carcinogenesis. Different studies have also found that its regular intake prevents the Alzheimer’s disease.

Turmeric is also a magic spice that can offer multiple skin benefits, thanks to its anti-bacterial and anti-inflammatory properties. No wonder, women across the world use it regularly to pamper their skin to get that extra glow.

While there is no dispute over its wide medicinal use, as an effective immune boosting agent to one that can make the skin glow, the quality of turmeric powder obtained from the market is a cause of concern, the reason being adulteration.

Hence to maximise benefits, one should cultivate fresh turmeric in one's own premises. Not much space is needed for its cultivation, a small pot in the balcony will do the trick. The plant doesn’t require much care too. Once ripe, the fresh turmeric roots can be used for cooking and other purposes. The fully ripe ones can be dried and ground into powder for diverse uses.

For details, write to drbinithapillai@gmail.com

(Dr. Binitha Parameswaran BAMS, MPH, is an Ayurveda Doctor. She obtained her Masters in Public Health from the University of Sheffield, United Kingdom)