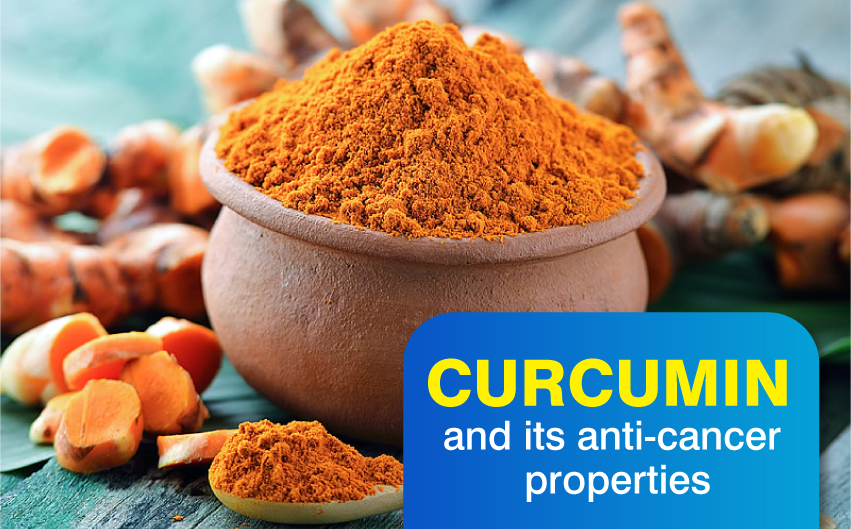 Curcumin and its anti-cancer properties

Spices have been widely used as condiments for thousands of years because of their flavour, taste and colour. Several spices have been used for treatment of various diseases as they contain many bioactive compounds and possess a number of health benefits. Turmeric is the most recognised among them and recent studies have focused on anti-cancer effects of curcumin, a polyphenol extracted from it.

Cancer is the second leading cause of death worldwide. Despite the substantial advances in cancer therapy, the incidence and mortality rates remain high. Continuous research in cancer therapy has established novel strategies like Chemoprevention to treat malignancy.

Chemoprevention is the use of particular synthetic or natural compounds to reduce, suppress or reverse the incidences of carcinogenesis. Various chemopreventive approaches have received attention from researchers due to their anti-oncological perspectives. In this context, bioactive constituents are being extracted using traditional plants as spices and herbs.

Curcumin, the active ingredient in Turmeric (Curcuma longa plant), has demonstrated therapeutic benefits in multiple chronic diseases: inflammation, arthritis, metabolic syndrome, liver disease, obesity, neuro-degenerative diseases and above all, in several cancers. It is the main ingredient or most active component of the spice turmeric, accounting for 2% of the spice. Native to India and Southeast Asia, turmeric is a commonly used spice.

Curcumin has many biological activities, although how these effects occur is not fully understood. Studies have demonstrated that Curcumin exhibits anticancer ability by targeting different cell signalling pathways, including growth factors, cytokines, transcription factors, and genes modulating cellular proliferation and apoptosis. It is a potent antioxidant, which means it has the ability to neutralise molecules that cause DNA damage, such as free radicals. As a result, Curcumin can decrease swelling and inflammation and is currently being explored as a cancer treatment because inflammation appears to play a role in cancer.

Laboratory and animal research suggests that Curcumin may prevent cancer, slow the spread of cancer, make chemotherapy more effective and protect healthy cells from damage by radiation therapy. Studies are being conducted in people to investigate Curcumin as a therapeutic agent, but clinical trials are still in relatively early stages. Despite the positive views, possible side effects may occur if taken in large amounts. Curcumin has also been shown to have a poor bio-availability due to its low absorption, rapid metabolism, and systemic elimination that can limit its efficacy in treatment of diseases. Consequently, many studies are now focusing on the development of innovative delivery systems for improving the absorption of Curcumin. Further research needs to be conducted to validate Curcumin as an effective anticancer agent, but it represents a promising candidate as a potential anticancer drug to be used alone or in combination with other drugs. In the meantime, it wouldn’t hurt to include some turmeric to spice up your diet.