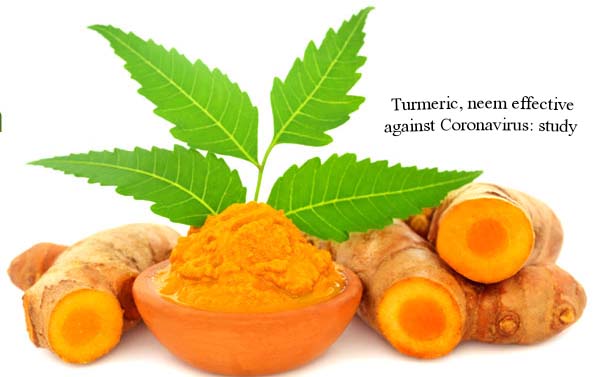 Ayurvedic herbal products such as turmeric and neem may be useful as a therapeutic or prophylactic agent against Covid-19 as they restrict the viral attachment to the host cells via inhibition of spike glycoprotein or its cellular receptor, a new study has found.

The findings of the research by a team of scientists led by Pro Shailendra Saxena, Head of the Centre for Advanced Research at the King George’s Medical University, Lucknow, has been published in the Springer Nature Journal of viral diseases.

The study, conducted through the 3D structure-based drug designing approach, primarily focussed on developing therapeutics targeting the spike glycoprotein of SARS-CoV-2 and its host receptor ACE2 to find potential attachment inhibitors for the treatment of Covid-19.

“..We studied the direct interaction between the herbal products and the virus. The results proved that some of the known immunity boosting products of Ayurveda like curcumin, nimbin (neem), ashwagandha and black pepper can restrict the virus’ attachment to the host cell receptor ACE2. This they do it by inhibition of spike glycoprotein of SARS-CoV-2 or its cellular receptor, thus blocking entry of virus into our body,” Saxena was quoted as saying.

As per the study results, curcumin (the active ingredient of Curcuma longa plant) and nimbin are the best ranked drugs among the natural products showing the inhibitory effect.

“..we’ve found curcumin, nimbin, withaferin A, piperine, mangiferin, thebaine, berberine and andrographolide may effectively inhibit the interaction of  spike glycoprotein with its receptor compared to other selected natural drugs. Also the pharmacokinetics data illustrated that all selected natural products have better pharmacological properties,” the authors said in the research paper.