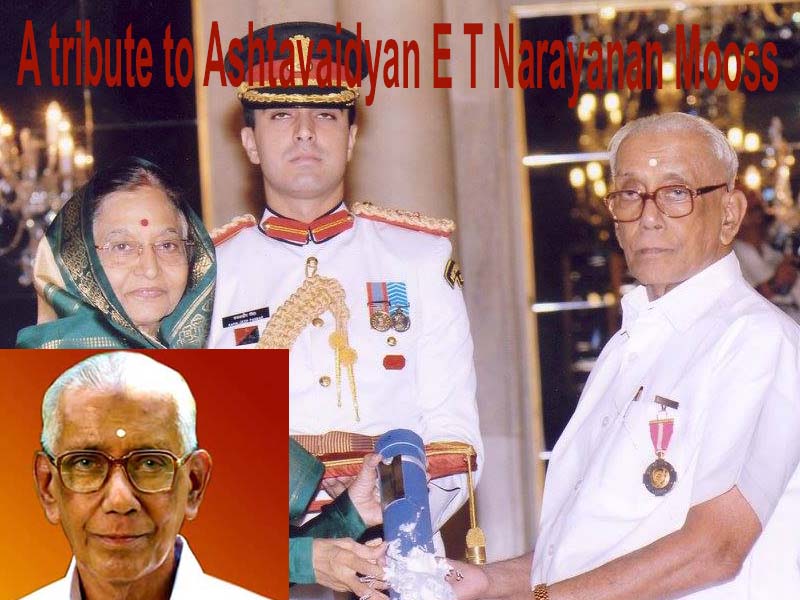 Ashtavaidyan E T Narayanan Mooss, who died on Wednesday, was a renowned Ayurveda exponent who paved the way for modernization of ayurvedic remedies by leveraging modern technology to meet the desired quality of drugs.

A Padma Bhushan awardee, Narayanan Mooss was instrumental in steering Vaidyaratnam Oushadhasala into one of the largest manufacturers of ayurvedic medicines, with an extensive sales network all over Kerala and in different parts of India.

Ever since he took reigns of the pharmacy back in 1954, Mooss had employed state-of-the-art methods for selection, cleaning, processing and storage of herbs and raw materials besides in the production and preservation of medicines. The same led to availability of ayurvedic medicines at reasonable prices to the public.

The Vaidyaratnam Oushadhasala owing to its quality standards was extended the ISO 9001:2000 certification. Besides classical Ayurvedic medicinal preparations, the Thaikkattu Mooss family developed many proprietary formulations and products, some of which are patented.

Narayanan Mooss was honoured with Padma Bhushan in 2010 for his remarkable contributions in the field of Ayurveda. He also won the prestigious 'SWADESHI PURASKAR' instituted by the SWADESHI JAGARAN FOUNDATION for the year 1997 and the AKSHAYA AWARD in 1999.

His father Ashtavaidyan E T Neelakandan Mooss, who set up the Vaidyaratnam Oushadhasala in 1941, was awarded the Padma Shri by the Government of India in 1992 while his grandfather Ashtavaidhyan E T Narayanan Mooss was conferred the title of ‘Vaidyaratnam’ by Lord Reading, the then Viceroy of India, in 1924.

Narayanan Mooss, who was the Chairman and Managing Director of the Vaidyaratnam Group, breathed his last at his residence at Thaikkattussery in Ollur, Thrissur, around 8 pm on Wednesday. He was 87. His funeral was held with state honours at ‘Thaikkattussery Mana’ on Thursday morning.