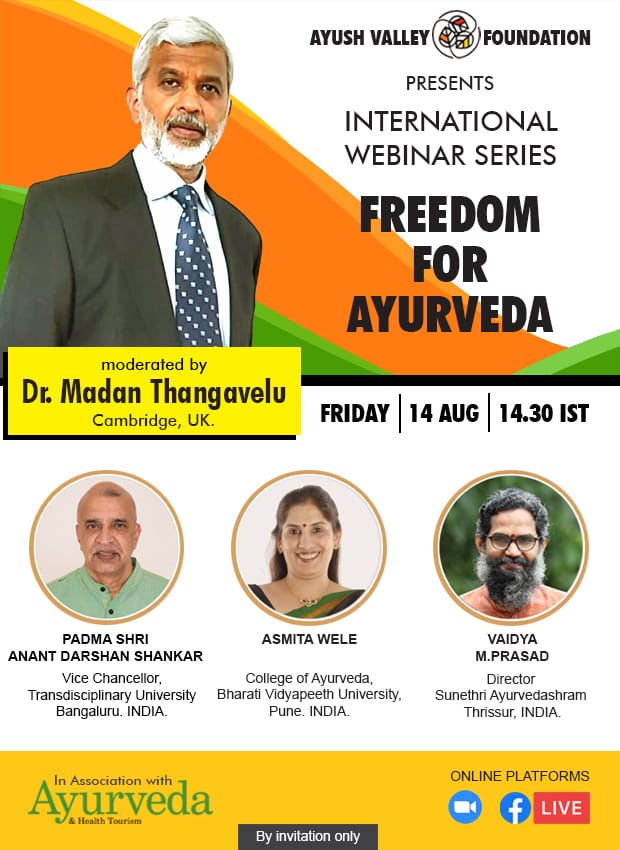 The third of the international webinar series, being organised by the Ayush Valley Foundation in tie up with the Ayurveda & Health Tourism Magazine and to be held on August 14, will discuss in detail why Ayurveda should be brought into the mainstream and allowed to contribute to the fight against major ailments, including Covid-19.

Despite proving to be effective in disease prevention and cure during studies, the traditional medicinal system is yet to get required nod for first line of treatment against major diseases like Covid-19. Recently, the All India Institute of Ayurveda (AIIA), New Delhi, has successfully cured Covid-19 patients using Ayurvedic treatment protocol. Many studies too have revealed that the viral spread is minimal among those who have taken Ayurvedic preventive measures.

The global community has also started acknowledging the immunity-boosting power of Ayurveda and is increasingly relying on the Indian traditional medicinal system, along with Yoga, during the pandemic times.

The speakers will also touch upon the future measures and approaches required to bring the ancient healing system into the mainstream. The virtual session will start from 2.30 pm (IST) on July 18. For further details, log into http://www.ayushvalley.org/ .

While the first webinar (June 27) focused on 'Can we live with Corona', the second edition (July 18) discussed the topic 'Ayurveda for Covid-19 Prophylaxis' in detail.