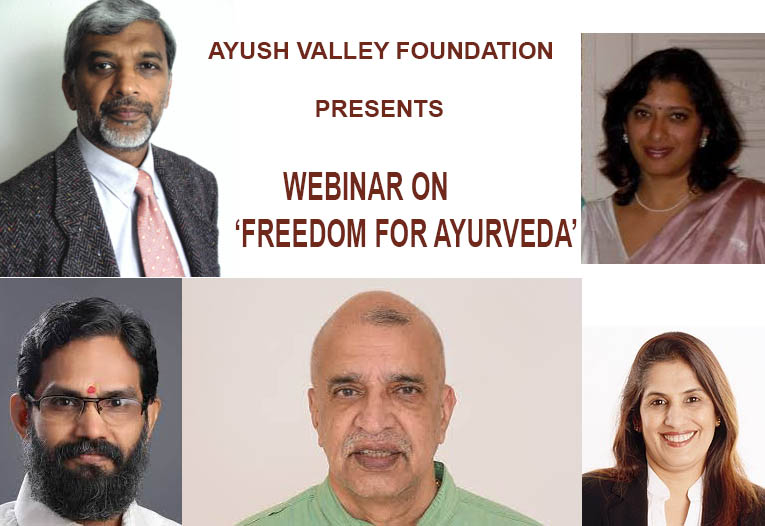 Experts have called for strategic interventions including policy formulation and better budgetary resource utilisation in key areas like Health services, Education and Research to facilitate the growth of Ayurveda and its elevation into the mainstream medical practice.

“…growth of the Ayurvedic sector is happening for sure. But, currently, a great deal of commodification is taking place. It’s not growing in the way it should …the challenge is to effect strategic interventions,” said Padma Shri Anant Darshan Shankar, Vice Chancellor, Transdisciplinary University, Bengaluru.

“For instance, in Education, the Minimum Standard Requirements is holding back the sector. We need to create Centres of Excellence which should be extended autonomy and the freedom to experiment new models,” he said in a free-wheeling conversation as one of the Speakers of the Webinar held on the topic ‘Freedom For Ayurveda’.

The event was the third of the international webinar series being organised by the Ayush Valley Foundation in tie up with the Ayurveda & Health Tourism Magazine. The interactive session was moderated by Dr Madan Thangavelu, noted Genome Biologist from the University of Cambridge, UK, and Dr Bhaswati Bhattacharya, a renowned Physician-turned Ayurvedic practitioner.

Another Speaker Vaidya M Prasad,former Principal of Ashtamgam Ayurveda Vidyapeedham, Palakkad, Kerala, too stressed on the need for reformations.

“There is a need for complete overhauling of the curriculum. It should not be mixed with notions of Modern Medicine and leave the students a confused lot…. Similarly, the so-called researches involving Ayurveda are actually leveraging the traditional medicinal system for the growth of the western medicine. This is clear as such exercises, including that for a Covid-19 cure, are done without invoking Ayurvedic thought process,” he said.

Asmita Wele, Head of Rasashastra and Bhaishajyakalpana Vigyan, College of Ayurveda, Bharati Vidyapeeth University, Pune, though batted for integration of the sciences, saying the best practices should be combined.

“There is no question about a patient-centered treatment approach. But the cross reference is always possible. We should try to bridge the gap between the sciences …and work in teams. The best practices should be combined and applied at every level,” she said.