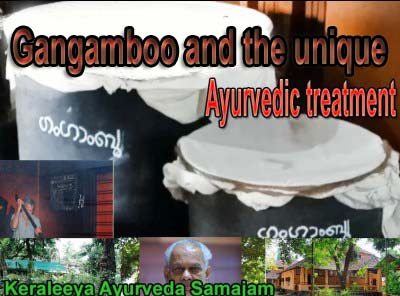 Gangamboo and other unique Ayurvedic treatments

Wonder which is the purest form of water? It’s ‘Gangamboo’ – the rainwater collected during the halfway stage of monsoon season after initial showers wipe out impurities in the atmosphere.

“The rainwater is collected by placing large vessels in open fields during the ‘Thiruvathira Njattuvela’ --  a two week period of continuous rainfall during the halfway mark of the monsoon season. The impurities in the atmosphere are washed by initial showers and the purest water can be obtained during the spell,” reveals M Muraleedharan, President, Keraleeya Ayurveda Samajam.

“The water ‘Gangamboo’ will be stored for one year and during the next ‘njattuvela’, the solution is used for preparation of medicines like ‘Anu Thailam’ (medicated oil used to treat problems affecting head, nose, eye, ear, neck and brain. It’s mainly used for Nasya treatment) and those for treatment of eye disorders,” he adds.

Samajam is located on the banks of Bharathapuzha, the longest river in Kerala, and the water is collected in vessels kept in the open along the river banks on the Thiruvathira Njattuvela occasion. Rainwater is considered pure as impurities and salt present in the water on earth are left behind during evaporation by the sun.

“Only Samajam still follows the traditional methods of medicinal preparation. Here no mechanisation is employed and medicines are prepared by hands. This way the medicines will have more effect and longevity,” Muraleedharan points out.

The Samajam extends unique treatments like dharoushadam. Cows will be brought and milked when the treatment starts. The fresh warm milk is used for dhara  treatment in the particular areas where the injury occurred, especially spinal cord.

Spread over 11 acres along the banks of Bharathapuzha, the Samajam still follows the same system of Ayurveda treatment instituted 115 years ago by the great ‘Vaidhyas’.

Live in harmony with nature: VP

Gangamboo and other unique Ayurvedic treatments