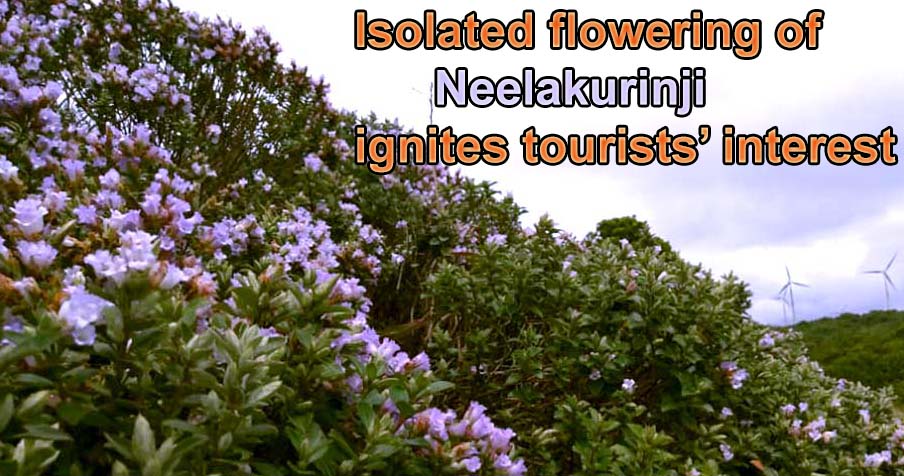 Neelakurinji (Strobilanthes kunthiana), the rare shrub that blooms once in 12 years painting the hill ranges of Munnar in the south Indian state of Kerala in varied shades of blue, surprised tourism stakeholders and travellers alike by flowering years ahead of its schedule in certain parts of the Western Ghats in Idukki.

The isolated flowering of Neelakurinji was observed in Pushpakandam Anakkaramettu hills of the Western Ghats, near Ramakkalmedu, in the Kerala-Tamil Nadu border. Though unusual, the phenomenon has infused much enthusiasm in the travel sector for prospective tourism campaigns post-Covid-19.

According to officials with the Department of Forests and Wildlife, Government of Kerala, the current blossoming is sporadic. The Eravikulam National Park, Munnar, which is the prime destination of Neelakurinji, did not witness this phenomenon. It is expected that the next mega flowering will happen in 2030.

For Kerala’s tourism industry, the mass flowering season of Neelakurinji usually holds much significance. The last time the State witnessed this rare spectacle was in 2018. Kerala Tourism expected a million visitors in the season from across the globe to witness nature’s wonder. However, the devastating floods that wreaked havoc in Kerala during the flowering season played spoilsport.

“Usually, the mass blooming of Neelakurinji is observed in the Eravikulam-Rajamala area. However, isolated flowering can be seen now in certain other areas of the hills such as the Chinnakanal, Chinnar, Kolukkumalai and Pooppara,” said Jayan P. Vijayan, Secretary, District Tourism Promotion Council (DTPC), Idukki.

“During these hard times of COVID-19 pandemic, this sudden flowering of the plant has spread some good cheer among the tourism fraternity. Neelakurinji is a major tourist attraction in Idukki district. Last time, due to the floods, tourists couldn’t enjoy the bloom. Now, we are thinking of devising strategies to market the same as soon as travel restrictions are lifted,” he added.

According to reports, Munnar in Kerala records the highest number of Neelakurinji plants across India, spreading across 3000 hectares compared to anywhere else in India. Of the 450 species of Strobilanthes identified in the world, 146 are present in the country. Among them, about 43 species are found in Kerala. Each shrub reproduces once in its lifetime and dies after blooming. It takes another 12 years for the seeds to sprout, grow up to 30 cm to 60 cm and blossom again.

Meanwhile, the Department of Forests and Wildlife, Government of Kerala, has taken up an initiative to redevelop the natural habitat of Neelakurinji plants. As many as 5000 saplings were planted in the proposed Kurinjimala Sanctuary at Vattavada in Munnar to aid in the propagation of this rare shrub. The seeds collected by the forest officials when Neelakurinji bloomed in 2018 were developed into saplings and planted in the valley.