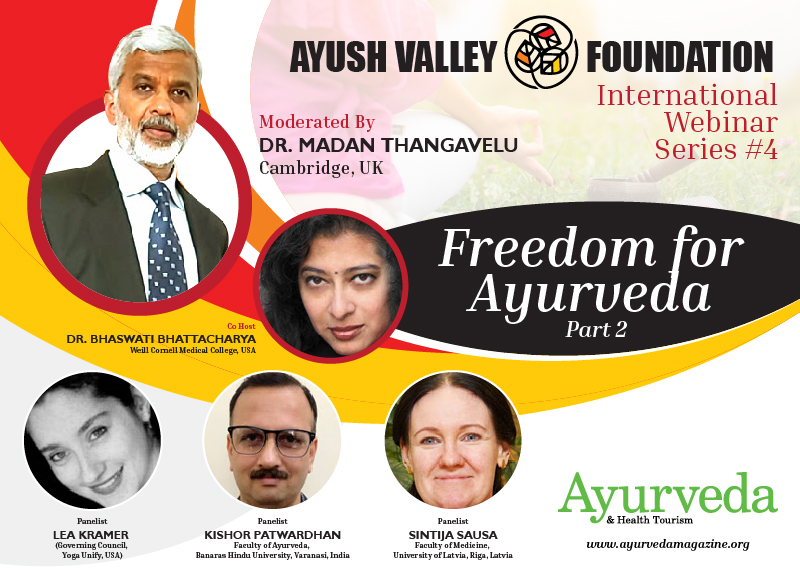 Ayurveda, the traditional Indian medical science, is faced with many challenges and the need of the hour is to initiate actions to find lasting solutions to issues in areas like Education, Research, Translation and Integrative Medicine treatment, according to Professor Kishor Patwardhan, Faculty of Ayurveda, Banaras Hindu University (BHU).

“At present, a sizable proportion of students opt for BAMS after failing to get into modern medicine courses. There is a dearth of good faculty and the application-based content in curriculum is minimum. Similarly, the PG/PhD level Research currently follows ‘One Disease-One Medicine’ approach. This is not how Ayurveda is practiced. Promote research that is in accordance to Ayurvedic principles,” he pointed out.

Prof Kishor was speaking as a Panelist in an international webinar held on the topic ‘Freedom For Ayurveda – sequel 2’. The over three-hour virtual session was the fourth of the international webinar series being organized by The Ayush Valley Foundation in association with the Ayurveda & Health Tourism Magazine.

He called for initiatives like Integrated 10-year BAMS/MBBS courses or having a common course for all medical graduates irrespective pf their streams.

“There is not much enthusiasm for an evidence-based research in Ayurveda where most practitioners are satisfied with laid down knowledge. This will prevent the system getting global recognition as the Allopathy community is not going to accept non-evidence based medicine,” said Dr Sintija Sausa, Faculty of Medicine, University of Latvia. She is currently engaged in exploring integrative medicine options by joining initiating research works with Ayurvedic experts.

She called for measures to facilitate Ayurveda graduate students to have basic knowledge about modern medicine too.

Another speaker Lea Kraemer, Governing Council Member, Yoga Unify, USA, noted that traditional medicines like Ayurveda and Yoga can be much effective as an integrative treatment option. “They can be used to alleviate side effects of Allopathy medicines while undergoing treatment for terminal diseases like cancer.”

The session saw active participation of Ayurveda experts like Vaidya M Prasad, Dr N V Sreevaths and Mala Kapadia among others. “Research should be a broader word when we put it to the traditional wisdom. It should be more accommodating in its meaning. It should be an effort to bring the good in the systems for a larger public and geographical boundary. For that the Gurus and Acharyas should not be put under the scanner of validation. Instead let the ayurvedic practitioners delve deep into Ayurvedic knowledge and their output analysed,” Prasad observed.

The session was moderated by Dr Madan Thangavelu, University of Cambridge, UK, and co-hosted by Dr Bhaswati Bhattacharya, Director, The DINacharya Institute.

In the first session on the topic held on August 14, Padma Shri Anant Darshan Shankar, Vice Chancellor, Transdisciplinary University, Bengaluru, had called for strategic interventions including policy formulation and better budgetary resource utilisation in key areas like Health services, Education and Research to facilitate the growth of Ayurveda.