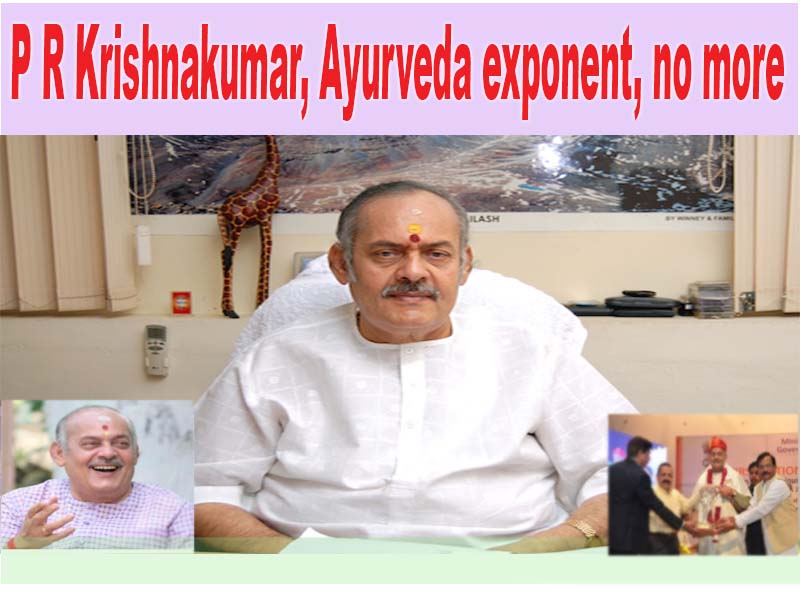 Padmashree (Dr) P R Krishnakumar, the head of ‘Arya Vaidya Pharmacy (Coimbatore) and a crusader of scientific validation of the traditional Indian medical system, died at a private hospital in Coimbatore on Wednesday night.

The eminent Ayurveda exponent was suffering from acute pneumonia and was undergoing treatment at the Kovai Medical Centre and Hospital, Coimbatore, for the last one week. His condition worsened and he breathed his last at 8.30 pm.

Krishnakumar has been conferred with the prestigious Padmashree Award in 2009 and the National Dhanwantari Ayurveda Award in 2016 by the Government of India for his outstanding contributions in the field of Ayurveda.

Born in 1951 as the son of Arya Vaidyan P V Rama Varier, the founder of Arya Vaidya Pharmacy (AVP), and Pankajam Rama Varier, Krishnakumar was instrumental in bringing Ayurveda to the attention of the World Health Organization (WHO), which along with the ICMR participated in the first clinical research on Ayurveda treatment of rheumatoid arthritis back in 1977.

Krishna Kumar championed the cause of scientific validation of Ayurveda, and incorporation of the best of modern science in both clinical practice and medicine production, particularly in organizations that he headed. He played a key role in the establishment of the AVT Institute for Advanced Research (AVTAR) in 2003. The institution was set up to conduct clinical, literary, field and drug researches and to train aspiring Ayurveda scholars.

It was Krishnakumar who first conceived and implemented the Gurukula pattern of Ayurveda studies, also in 1977, by charting out a unique 7½ year course. It included components like spiritual practices and traditional martial arts, set in an environment conducive to learning in which students lived alongside their teachers. The successful curriculum model was later known in academic circles as the “Coimbatore Experiment”.

Krishnakumar, a celibate, was instrumental in leading the AVP company from its humble beginning to one of the country’s greatest traditional Ayurveda houses with over 600 outlets across the country. He held various top positions like the Chairman of CARe Keralam (Confederation for Ayurvedic Renaissance-Keralam Pvt Ltd) and the Chancellor of Avinashilingam Institute for Home Science and Higher Education for Women, Coimbatore.