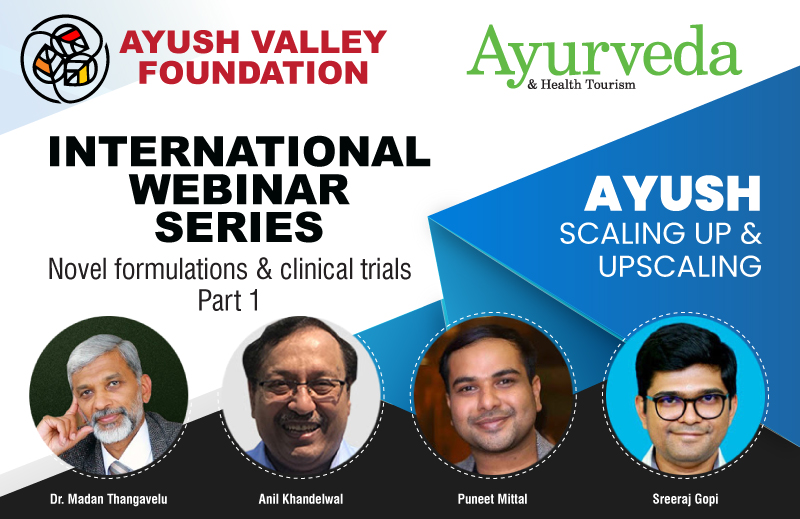 Scale up Ayurveda evidences for its global acceptance

Ayurveda, the ancient Indian medical science, should be strengthened through evidence-based research, standardisation and documentation to facilitate its global acceptance, according to experts.

"There is no question over the efficacy of holistic healing science. But you need to prove each Ayurvedic formulation if the global community needs to accept them. Establishing matrix effect of the marker constituents of decoction and the like should be taken up without fail. The safety and standardisation of ayurvedic drugs should be laid down to make them commercially viable and to enhance Ayurveda reach," pointed out Sreeraj Gopi,a chemist who has done extensive research on Phytochemicals (plant-derived chemicals). He is a Fellow of the Royal Society of Chemistry.

He was speaking in the international webinar on 'AYUSH: Scaling Up & Upscaling -- Novel formulations and Clinical Trials', organised by the Ayush Valley Foundation in association with the Ayurveda & Health Tourism Magazine.

"80 per cent of non-communicable diseases are on account of lifestyle habits. The treatment should be on root-cause of these diseases -- inflammatory conditions, and the focus should be on preventing them," he said, while batting for preventive healthcare.

"The usefulness, safety and adverse effects, all need to be laid down clearly. The Ayurvedic formulations should be statistically validated and justified for worldwide acceptability of Ayurveda," he said.

Meanwhile, the meaningful discussions threw up challenges like the cost of research and the waste of valuable time in "proving time-tested treatment procedures".

"Reverse pharmacology is more needed for Ayurvedic trials. The foundations have already been laid down and clinical practices should build on that. We need a patient-oriented approach rather than an industry-oriented one," said noted Integrative Oncologist Dr Arvind Kulkarni.

"There is no need to prove the system... a large section already knows the value of the ayurvedic treatments based on their personal experience. Instead there's a need for awareness," said Dr Bhaswati Bhattacharya, a practicing holistic family physician-scientist.

The over two-hour session was moderated by Dr Madan Thangavelu, noted Genome Biologist from the University of Cambridge, UK.