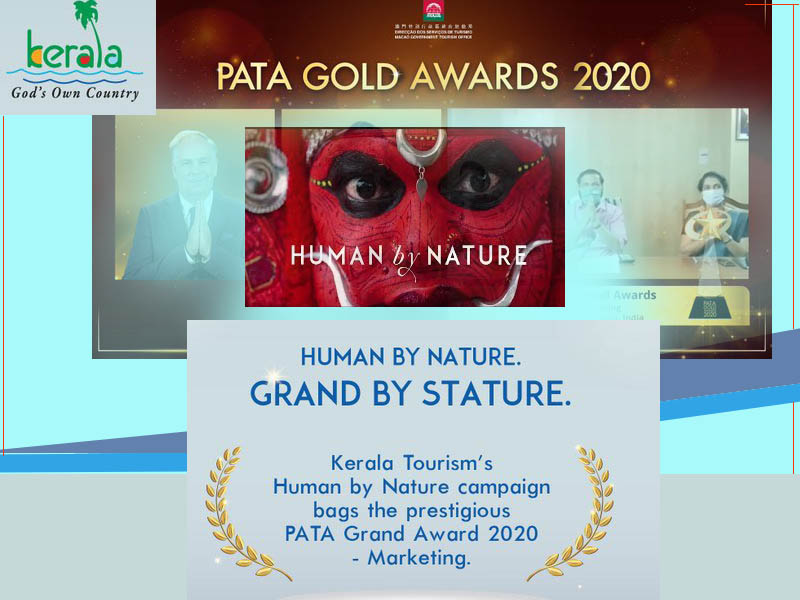 Kerala Tourism was bestowed upon the prestigious ‘PATA Grand Award 2020 for Marketing’ for its ‘Human by Nature’ campaign, originally conceived to revive tourism in the south Indian state post the 2018 devastating floods and the Nipah virus outbreak.

“The campaign goes beyond touristy landscapes to celebrate humanity by portraying the fascinating interplay of humans and nature in a land known for its open, inclusive way of life,” Kerala Tourism tweeted soon after the announcement.

It was for the first time that this year’s PATA Gold Awards, supported and sponsored by the Macao Government Tourism Office (MGTO), were announced virtual since its inception in 1995. The awards recognised the achievements of three Grand title winners and 21 Gold Awards.

“I believe the latest award would provide a huge stimulus to the state’s on-going efforts to rev up our tourism sector through innovative means as it is the mainstay of Kerala’s economy and contributes around 10 per cent of the state’s GDP. In the wake of the Covid-19 pandemic, we have to reboot the travel sector with focus on domestic tourism and safety at every point of destination,” the minister said.

The campaign, aired in international media and airport displays in key cities, helped Kerala achieve a record growth rate of 17.2 per cent in 2019, the highest in tourism arrivals in 24 years.

“The PATA Grand Award is a huge affirmation of the creative brilliance of our marketing campaigns and it shows that the Human by Nature campaign has struck the right note with global travellers,’’ Rani George noted.

“We are trying to rejuvenate our tourism sector by innovative business models that would create reassurance for travellers and ensure a responsible and sustainable tourism industry. We need to win the trust of travellers. That is going to be the cardinal driving force for tourism industry in the state,” Tourism Director Bala Kiran said.

Founded in 1951, PATA is a not-for-profit membership association that acts as a catalyst for the responsible development of travel and tourism to, from and within the Asia Pacific region.