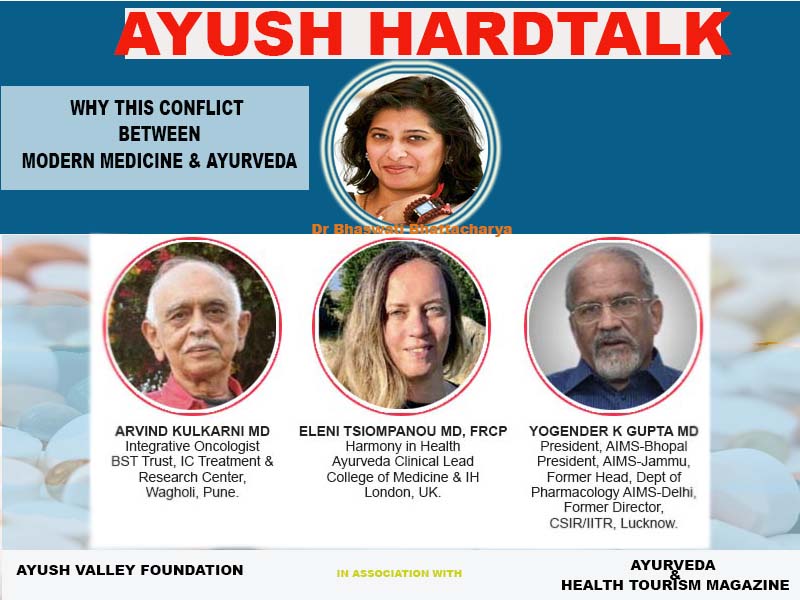 “The much-needed dialogue between the different systems of medicine should happen for an effective system of health and well-being…Integrative Medicine, incorporating the best from both the systems of medicine, should be increasingly practiced. Patients must be informed of the advantages and disadvantages of both for specific conditions,” said Gupta, who previously held the position of Head of Department (HoD), AIIMS, New Delhi.

He was one of the expert panelists attending the first of the ‘Ayush HardTalk’ webinar series held on Sunday on the topic ‘Why this conflict between Modern Medicine and Ayurveda’.

“Ayurveda is a great science which looks at the holistic well-being. It’s much effective when dealing with chronic diseases and specific conditions …The education of basic philosophy behind the traditional art and science should be initiated. The government has to help in informing the society about the system… Not just the common man, but policy makers and politicians have to be educated about the benefits and treatment potential,” said Arvind Kulkarni, Integrative Oncologist BSD Trust, IC Treatment & Research Centre, Wagholi, Pune.

The Ayurvedic intervention should be supportive to modern medicines from the beginning (in curing chronic diseases) rather than at a later stage, said Kulkarni, who have treated over 30, 000 Cancer patients.

“Basic education and training about the other systems of medicine should be imparted to disciples of both Western Medicine and traditional systems like Ayurveda,” said Elensi Tsiompanou MD, FRCP, Harmony in Health Ayurveda Clinical Lead College of Medicine & IH London, UK.

The experts called for modernization of Ayurveda through tools such as proper documentation and statistical analysis so as to propagate the system globally with evidence of its efficacy.

The series, being organised by the ‘Ayush Valley Foundation’ in tie up with the ‘Ayurveda & Health Tourism’ Magazine, is moderated by Dr Bhaswati Bhattacharya MD MPH (Harvard) PhD (Ayu-BHU). She is a Fullbright Specialist (2018-2022) in Public Health and Clinical Assistant Professor of Medicine, Weill Cornell Medical College, New York.

The over-an-hour webinar series is held on the first Sunday of every month. Experts and ‘Who is Who’ from various health systems will discuss the critical issues hindering progress of the AYUSH system of medicines despite its growing acceptance among global audiences.