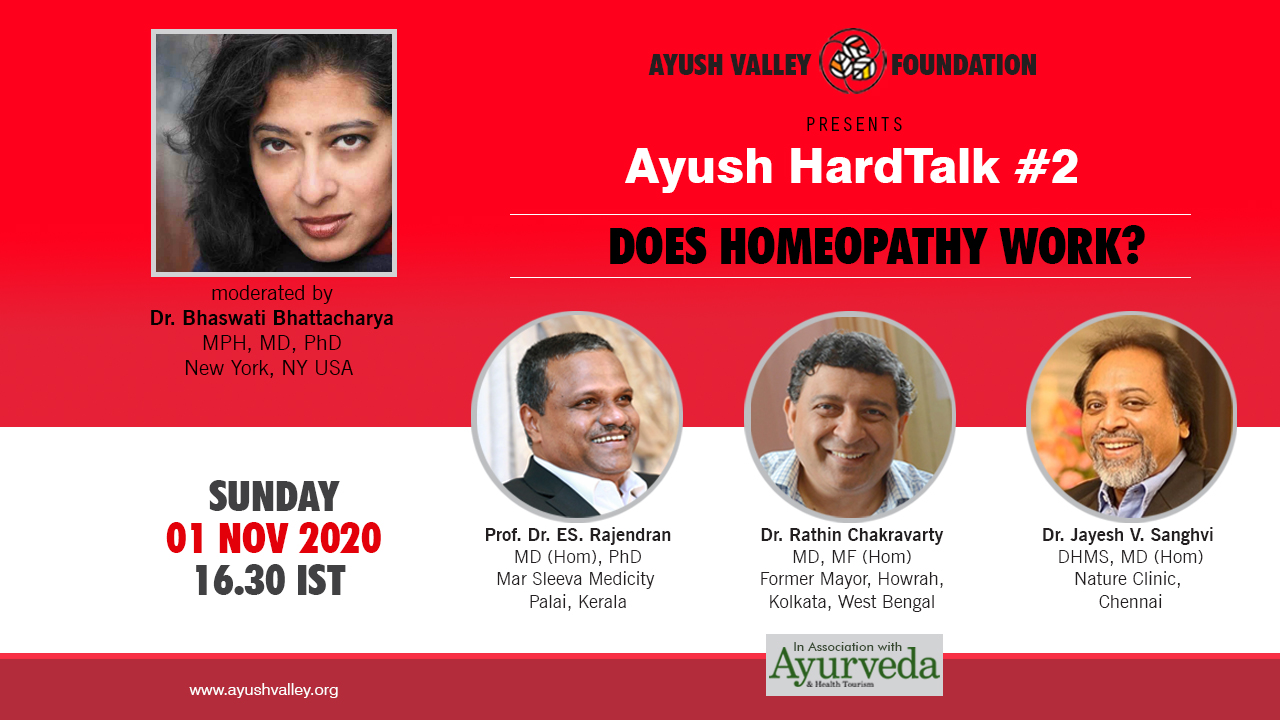 The second of the ‘Ayush Hard Talk’ webinar series, a string of hard-hitting debates and in-depth analysis of bottleneck issues hindering the progress of AYUSH medicines, will be held on November one.

The topic ‘Does Homeopathy Work’ will be discussed in detail by a panel of experts, including Dr Jayesh V Sanghvi, MD (Hom), Nature Clinic, Chennai, and Dr Ratin Chakravarthy, MD, MF (Hom), Howrah, West Bengal, during the one hour session to be held from 4.30 pm (IST) on Sunday next.

While a section argues Homeopathy as very valuable in the management of acute medical conditions like stroke, others, especially from the field of modern medicine, sound a tone of caution. Noted Homeopaths, though, point out that there have been instances where no allopathic management was required because homeopathic treatment had been started before the patient arrived at the hospital. The Central government has included Homeo clinical trials for Covid therapy and the same is in final stages.

The ‘Ayush Hard Talk’ series was rolled out on October four when the initial episode on the topic ‘Why this conflict between Modern Medicine and Ayurveda’ received an overwhelming response.

The series, being organised by the ‘Ayush Valley Foundation’ in tie up with the ‘Ayurveda & Health Tourism’ Magazine, will be moderated by Dr Bhaswati Bhattacharya MD MPH (Harvard) PhD (Ayu-BHU). She is a Fullbright Specialist (2018-2022) in Public Health and Clinical Assistant Professor of Medicine, Weill Cornell Medical College, New York. Trained as a biomedical scientist, international public health specialist, and primary care physician before gaining skills as a holistic healer, Dr Bhaswati practices and teaches Ayurveda and holistic family medicine in Manhattan and in India.

The webinar series will be held on the first Sunday of every month. Experts and ‘Who is Who’ from various health systems will discuss the critical issues hindering progress of the AYUSH system of medicines despite its growing acceptance among global audiences.