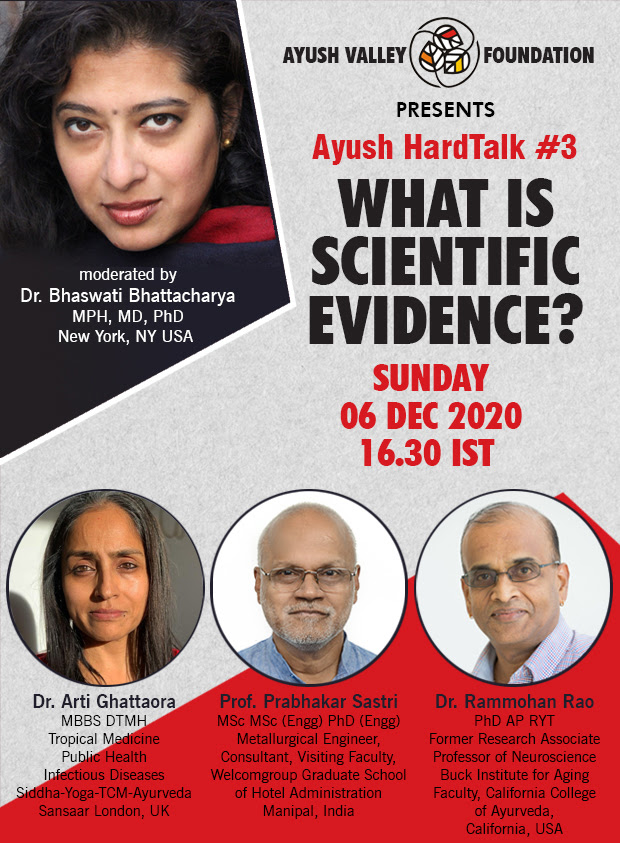 The third in the ‘Ayush Hard Talk’ webinar series, jointly organized by the ‘Ayush Valley Foundation’ in tie up with the ‘Ayurveda & Health Tourism’ Magazine, will be held on December six.

‘Ayush Hard Talk’ series is a string of hard-hitting debates and in-depth analysis of bottleneck issues hindering the progress of AYUSH medicines.

The topic ‘What is Scientific Evidence’ will be discussed in detail by a panel of experts, including Dr Arti Ghattaora, Ayurveda Sansaar, London, UK, Prof Prabhakar Sastri, Consultant, Welcomgroup Graduate School of Hotel Administration, Manipal, India, and Dr Rammohan Rao, Faculty, California College of Ayurveda, US, during the one-hour session to be held from 4.30 pm (IST) on Sunday.

Scientific evidence serves to either support or counter a scientific theory or hypothesis and is expected to be empirical evidence and interpretable in accordance with scientific method. However, many challenges have to be addressed including the extend, cost involved for research works and whether the standard applicable to one system can be adopted to the other.

The series will be moderated by Dr Bhaswati Bhattacharya MD MPH (Harvard) PhD (Ayu-BHU). She is a Fullbright Specialist (2018-2022) in Public Health and Clinical Assistant Professor of Medicine, Weill Cornell Medical College, New York. Trained as a biomedical scientist, international public health specialist, and primary care physician before gaining skills as a holistic healer, Dr Bhaswati practices and teaches Ayurveda and holistic family medicine in Manhattan and in India.

The webinar series is being held on the first Sunday of every month. Experts and ‘Who is Who’ from various health systems will discuss the critical issues hindering progress of the AYUSH system of medicines despite its growing acceptance among global audiences.