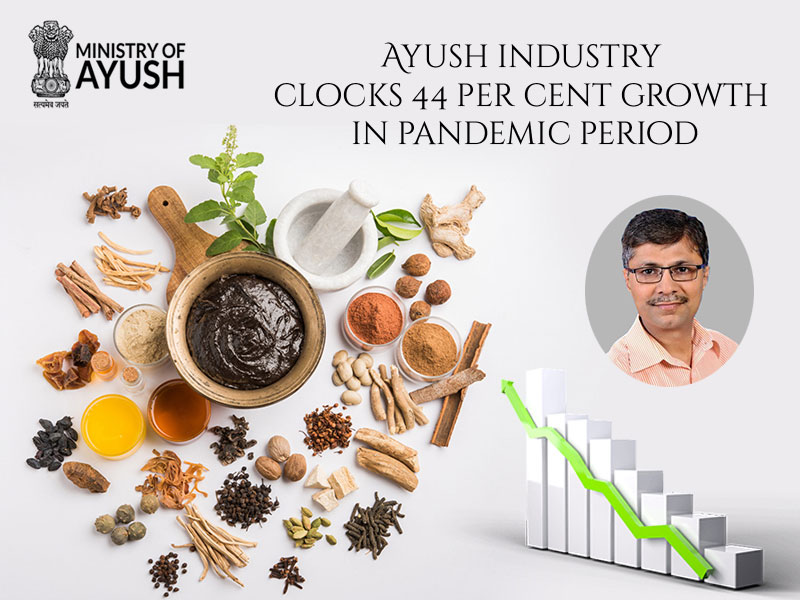 The Ayush industry scripted a striking growth story during the pandemic days as the demand for Ayush medicines recorded a stupendous 44 per cent growth in the last nine month, Ayush secretary Dr Vaidya Rajesh Kotecha has said.

He was presiding over a session on ‘Future lies in the past – Leveraging India’s embedded knowledge to pivot the country’s growth story’ held by ‘The Associated Chambers of Commerce and Industry of India (ASSOCHAM).

While the industry grew by 44 per cent during the pandemic months, certain medicines showed 500-600 per cent growth during those times.

Dr Kotecha pointed out that there are tremendous growth opportunities for businesses in the sector. “We need to capitalize on the huge opportunity presented by the crisis and we all, -- the industry, the plant growers, the state governments – should work together to grow the industry. Working together is the key,” he added.

The ministry has already initiated talks with industry bodies like ASSOCHAM to come together and set up an ecosystem of supply-chain management in the country. “We should follow the Kerala model wherein the medicine industry buys produce directly from the plant growers or farmers, thereby benefiting each other,” the Ayush secretary noted.

Dr Kotecha particularly pointed out that the time is right to propagate ‘Ayurveda Ahar’ from the commercialization point of view. “Along with the value-added plants or APIs in India, we can standardize various recipes indigenous to us,” he stated.