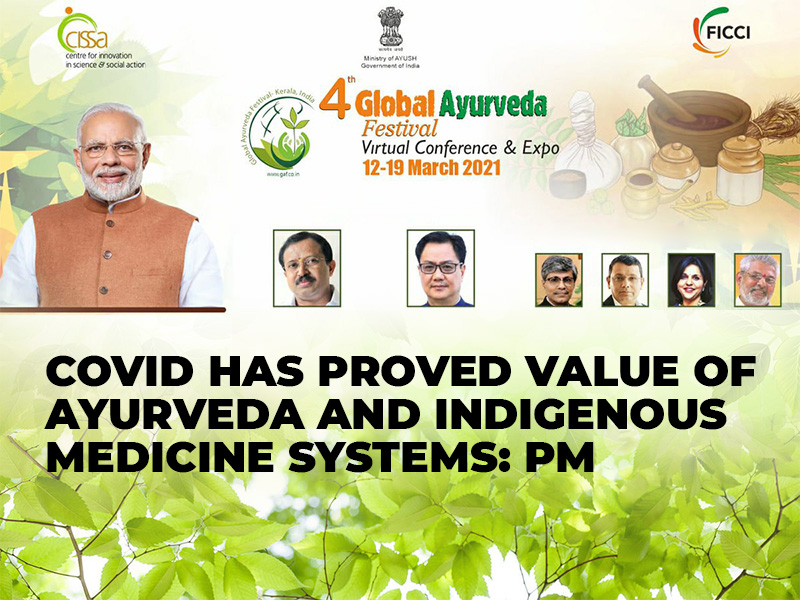 Prime Minister Narendra Modi has said that the true value of Ayurveda and other traditional medicine systems has been proved globally during the Covid 19 pandemic.
Inaugurating the 4th Global Ayurveda Virtual Festival on March 12, the Prime Minister pointed out that this was particularly true of India where Ayurveda is inextricably linked with the national culture and nature.
"Ayurveda says, 'Hita hitam, sukham dukham, ayu dasya hita hitam, manam sya tachya yatra uttam'. Ayurveda can be described as a comprehensive health system for human beings," the Prime Minister said.
The Financial Times reports that global demand for spices such as turmeric and ginger is on the rise. This indicates a good opportunity for the Ayurvedic sector to grow. Traditional medicine with modern therapies for a healthier future is the necessity and the world and everyone is realising it, the Prime Minister said.
India promotes 'Wellness tourism' (Healthy tourism). Wellness tourism is not only about treating the disease but also treating the disease for greater well-being, he said and  added that this is an important pillar of Indian Ayurveda and tourism. "This is a great opportunity waiting for the country, do not give up," Mr. Modi said.
Pointing out that there were many opportunities for young people to do research and start new ventures in Ayurveda, the Prime Minister said that government would extend all the support for such initiatives. The launch of the National AYUSH Mission of India shows the importance given to Ayurveda. It strengthens Ayurvedic treatment and education.
The World Health Organization (WHO) has announced the launch of a global centre for traditional medicine in India. It is a  welcome decision as students from different countries will come to India to study Ayurveda. India's  policy on Ayurveda is in line with the World Health Organization's guidelines for traditional treatments.
"Swasthasya Swatha Rakshanam,Atturasya Vikarasamanam" -- that is, Ayurveda not only heals wounds but also protects the health of the whole body. Ayurveda is not only about disease but also about getting rid of disease. Ayurveda says that if you enjoy food with patience very slowly, you will not have to go to the hospital, the Prime Minister said.
The eight-day Global Ayurveda Festival is being attended by scientists from more than 25 countries. The Prime Minister said that this indicates the growing interest in Ayurveda and traditional medicines
Union Minister for Youth Affairs Kiran Rijiju, who is also in charge of the Ministry of AYUSH, and Union Minister of State for External affairs and Chairman of the Organizing Committee V.Muraleedharan were the chief guests.
Central AYUSH Secretary Vaidya Rajesh Kottecha and Chief Scientist of the World Health Organization Dr. Soumya Swaminathan and Central AYUSH Advisor Vaidya Manoj Nesari delivered the keynote addresses.
FICCI President Uday Shankar, former FICCI President Dr. Dr. Sangeetha Reddy, President, CISSA and Secretary General, Global Ayurveda Fest; GG Gangadharan CISSA General sevretary, Dr C Suresh Kumar ,Chief Coordinator of Global Ayurveda Festival and General Secretary CISSA l, participated.
The 8-day festival also features an international seminar, a global exhibition and a business meet.
Tags: Narendra Modi Global Ayurveda Virtual Conference Covid