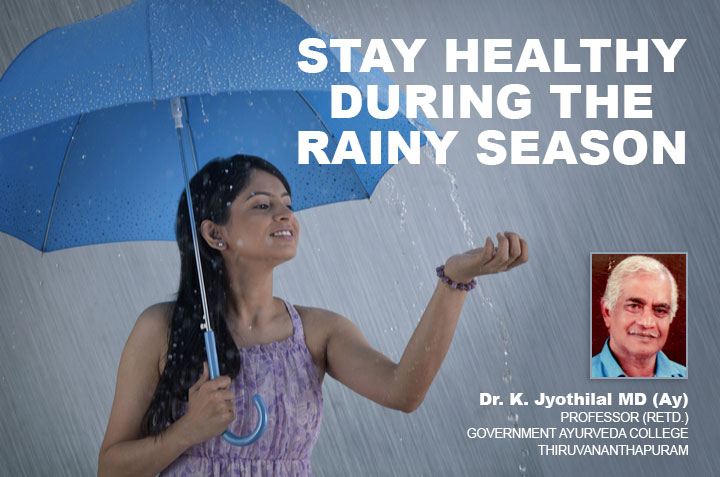 Stay healthy during the rainy season

“My Love! May this beautiful rainy season, that catches the heart of beautiful women and provides life to all living things, bless you, by fulfilling all your desires”
Kalidasa (Ritusamharam, Sarga 2, Sloka 29)

Wind that blows over the southern seas brings in the rainy season in the middle of the Malayalam month Edavam. The tryst of the rain-bearing clouds with the west-facing undulating hills of the Kerala coast thus marks the arrival of the South West Monsoon.
After the scorching summer, the skies suddenly turn dark with the gathering clouds hanging heavy over the land. Heralding the arrival of the rains are thunder and lightning. And then the skies open up, rain falling copiously.
Edavappathy-rain (paathy=half, meaning ‘beginning at the middle of Edavam’) experienced in Kerala is the rain of the varsha-ritu, usually accompanied thunder and lightning. It weakens at times and then the praavrit season gains strength again.
When the earth that has dried in the greeshma-ritu from the intense sun heat suddenly receives the rain and cools down, it results in the formation of acid salts. The hot quality of greeshma-ritu is quite the opposite of the cold quality of vaatha, which means that, this is the period when vaatha gets aggravated because of the dampness in nature.
The varsha-ritu is the time of the year when all the three doshas—vaatha, pitha and kapha—get inflamed. When the vapours rising from the earth comes into contact with the acid salts in the atmosphere, they vitiate the pitha dosha, inherent in the human body.
The rains wash away all the waste and pollutants that get accumulated on the earth’s surface during summer, polluting waterbodies and causing waterlogging. Usage of such water results in kapha dosha. The flow of vitiated vaata is prevented by the contaminated pitha and kapha dosha, which, in turn, results in the vaata dosha aggravating pitha and kapha doshas.
Dampness also causes hardening of the kapha dosha, which becomes incapable of vitiating to other places, ie., only chaya (accumulation) occurs. This dampness in nature, along with the harshness from the increased vapour forms of acid salts, corresponds to the sasnehatheekshoshna quality of pitha dosha resulting in its accumulation.
Pitha is hot in quality and varsha ritu is cold. So, pitha alone can accumulate and this weakens the digestive process. This slowness of the digestive fire causes increased dosha contamination. Thus, the doshas and fires contaminate each other.
Diseases during the Rainy Season
If we analyse the diseases during rainy seasons, diseases affecting the digestive system are the most predominant. Usage of contaminated water causes diarrhoea, amoebic dysentery, cholera etc., which are related to the digestive system and favoured by the slackening jadaraagni. So, food and lifestyle activities must be modified during the rainy season. Care must be taken to avoid vector-borne diseases during this time.
Visha Sankata Roga
If a person with pitha prakruthi consumes polluted food or practices the use of food that might cause pitha during the rainy season, he will be affected by a disease called Vishasankata. Only a few out of a hundred affected persons would survive this condition. So, persons with pitha prakruthi should take special care during the rainy season.
Since contamination increases during varsha ritu, everyone must be careful about possible food poisoning. Since the poison originates in the ocean, varsha ritu multiplies its power. Pitha and raktha have aasraya and asrayee relation (inter-dependence).
Things to avoid during the rainy season
Avoid using stream water for bathing and drinking. Also, avoid water with parched grains, food in excessive liquid forms, naps during the day, intense labour and exposure to sunlight. Mustard, kodrava (kodo millet), Uddalaka rice (rice from long awned-pady grain), horsegram, gourd, snake gourd, bottle gourd, kasamarda, colocasia, garlic, red banana, green grapes, etc., must not be consumed during rainy season.
Since the season is a vaatha-vitiating one, reduce intake of food that taste sour and increase those that are sweet and salty. Even then, since it is the time when pitha dosha gets accumulated in the body, the pitha-pacifying astringent, bitter and sweet foods should be consumed only in moderate quantities. Sweet food can be taken so as to pacify both vaata and pitha in such a way that it aids the digestive process. Avoid fish, mutton, curd and buttermilk and do not stay awake late into the night.
Things to practice during the rainy season
One may consume soup of pulses and meat that are tempered with ghee and rice, wheat, barley, pulses, meat-juices, moderately sour food, salt, honey, green gram soup, vine, thin curd processed with black salt (Kala Namak), powder of Panchakola (Panchakolachoorna), rain water or water from wells, soups prepared from green gram, Bengal gram etc., food items prepared with tamarind, salt and ghee, food that are liquid in nature, and old vines from grapes.
Undergo body massage with herbal powder (Udwarthana), wearing dresses that are exposed to fumigation by sandal and Agarwood (Agaru), expose body to fumigation by Astagandha, use foot-wear, prevent entry of crawling creatures such mosquitoes, flies, rats into the house. Fumigate the home and premises with Dronapushpi, dried Neem leaves and mustard. Wear pure and clean laces. Sandal and Agaru are to be applied to the body.
Therapies during the rainy season
Undergo elimination therapies such as purgation and emesis followed by lubricant enema to detoxify the body. According to Astangahrudaya, on days of heavy rain, one should consume only food in which sour and salty tastes are clearly distinguishable and which can be made into dumplings with ghee and honey. The ancient text also advises abstention from sex, avoidance of walks, exercises, exposure to mild shower, and exposure to sunlight.
Consuming Abhayarishtam (50 ml each twice—half an hour after lunch and supper) is good for better digestion and excretion. If a person is diabetic, it is better to take  chiruvilvadhi Kwadham instead of Abhayarishtam. Ashtachoornam is a good remedy to prevent inflammations during the rainy season. Take 3/4 teaspoon of it at 11am and 5pm. Mustharishtam, Kaidaryadhi Kwadham etc. also are recommended.
Dr. K. Jyothilal MD (Ay)
Professor (Retd.),
Government Ayurveda College,
Thiruvananthapuram.
Phone: 9387805568