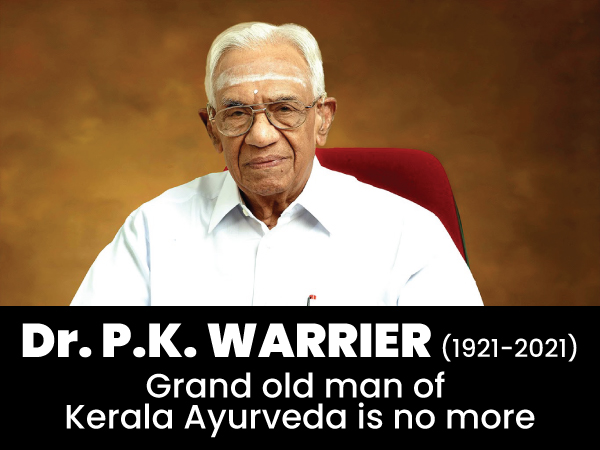 Dr. P.K. Warrier, who stood as a beacon representing the very best in Kerala’s glorious Ayurvedic tradition, has departed, leaving behind a difficult-to-fill vacuum.

The centurion, who was the epitome of all that is good and great about Ayurveda, breathed his last around noon on Saturday (July 10).  Dr. Warrier had celebrated his 100th June 5.
Dr. Warrier, the tallest of the Ayurveda practitioners in the world, is the recipient of ‘Padma Shri’ in 1999 and the ‘Padma Bhushan’ in 2010. The Calicut University had conferred an honorary D. Litt. on him in 1999 for his stellar contributions to the modernisation of Ayurveda.

Dr. Warrier, the youngest nephew of Vaidyaratnam P. S. Warrier, the founder of Kottackal Arya Vaidya Sala, had taken charge as its Chief Physician and Managing Trustee, after his elder brother’s demise in a plane crash in 1954 and steered the institution into the single important destination for anyone seeking ayurvedic remedies from their ailments, be they from within India or abroad.

Under Dr. Warrier’s stewardship, Kottackal Arya Vaidya Sala has evolved into a premier institution of ayurvedic learning, research and drug manufacture. The Vaidya Sala today has five hospitals, a 300-bed facility and a charity hospital at Kottackal, and treating hospitals at Kochi, Delhi and Himachal Pradesh. The Vaidya Sala is also a major manufacturer of ayurvedic drugs, its three state-of-the-art drug manufacturing facilities having an annual turnover of $20 million.
Through the often-difficult journey through the second half of the last century, Dr. Warrier remained unwavering in his commitment to authentic ayurvedic practices and the lofty tradition of being there to cure all, regardless of their economic status. Over 800,000 people benefit every year from free consultations at Vaidya Sala’s hospitals and the twenty-two branches located in different parts of Kerala and India.

Dr. Warrier has all along been a proponent of the idea of the Ayurveda practitioner getting an insightful understanding of a patient’s condition in the traditional way, through close interaction and physical examination, rather than through diagnostic investigations. Even so, he has always been ready to acknowledge the validity of other systems of medicine and ever so keen to keep himself abreast of the developments in these fields.

Dr. Warrier has tried to propagate this holistic approach to treatment of diseases through his writings and speeches, contributing heavily to contemporary medical literature. His writings, speeches and research papers have been compiled under the title ‘Padamudrakal’. As Secretary of Arya Vaidya Samajam, he guided the growth of the Vaidyaratnam P.S. Warrier Ayurveda College (previously Arya Vaidya Pathasala) for over two decades, during the time when it was upgraded to an Ayurveda College.

Dr. Warrier made special efforts to incorporate technological innovations in the manufacturing processes of Ayurvedic medicines to enhance their efficacy and quality. In order to make the medicinal preparations more accurate, he established a research laboratory for the identification of medicinal plants and to ascertain the chemical identity of its pharmaceutical constituents. Now, this facility has grown into the Centre for Medicinal Plants Research, a full-fledged research institution.