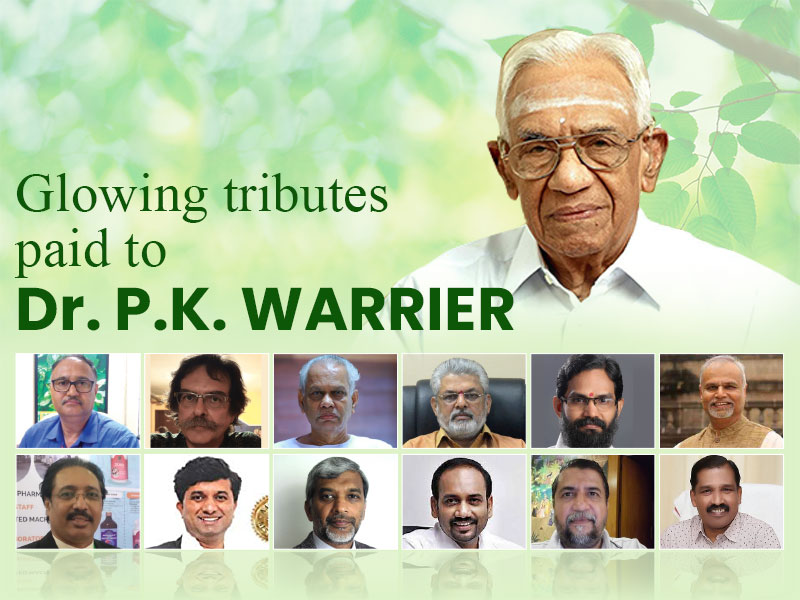 Rich tributes were paid to Dr. P.K. Warrier, doyen of Ayurveda, who passed way on July 10, 2021, at a virtual remembrance meeting organized by Ayush Valley Foundation.

Eminent personalities from the field of Ayurveda within and outside India addressed the meeting, collectively underlining his peerless contributions to the popularization of Ayurveda as a holistic healing system across the world.

They also recalled their personal association with Dr. Warrier, the way he nurtured the Kottakkal Arya Vaidya Sala into a global destination for anyone seeking Ayurvedic treatment, and his patient and large-hearted mentorship of several generations of Ayurveda practitioners from different corners of the globe.

Dr. Katoch recalled his first meeting with Dr. Warrier in 2000 when he took a high-power delegation from Europe to Kottakkal Arya Vaidya Sala. “He was so humble, so accommodative. He explained to us how Ayurveda developed in Kerala and what was the contribution of the Arya Vaidya Sala in its growth,” he said.

Dr. Katoch said he met with Dr. Warrier again when he took another delegation of parliament members from Europe, who were the members of the Health Committee of the European Union, to study the potential of traditional medicines. The delegation spent one-and-a-half days at the Arya Vaidya Sala and had fruitful interaction with Dr. Warrier, he said.

Dr. Antonio Morandi said he had met Dr. Warrier in 2011. To the students, he was the living example of incredible Ayurveda. He was 90, but he was much younger than everyone around--moving, interacting and discussing with them—displaying his sharp mind. “He has been an example for all of us all these years! When a person like Dr. Warrier lived, he lived for Ayurveda, spreading it all around. For us, he has always been a mythological figure. He has been an example of science, of entrepreneurship, an example of incredible capacity to see the future,” Dr. Morandi said.

Vaidya M. Prasad said he was very close to his mentor Vaidyarathnam Raghavan Thirumulpad and that they were friends and companions, who kept a very warm relationship. Dr. Warrier, he said, “has left us with a lot of responsibility. He had shown that it is possible to live nobly, with high standards of mentorship, Vaidya Prasad said.

M. Muraleedharan said he had always made it a point to invite Dr. Warrier over to the Samajam whenever dignitaries came calling. When the then President Shankar Dayal Sharma visited the Samajam, he went personally and brought Dr. Warrier over to interact with him. Dr. Warrier had made Kottakkal the synonym for Ayurveda and treated people without discriminating them based on religion or economic status. One proposal that he had discussed with Dr. Warrier about setting up common outlets for all ayurvedic drug manufacturers. He was fully supportive of the proposal, but the proposal could not be taken forward. “The relationship between Ayurveda Samajam and Arya Vaidya Sala goes beyond a century. We will not get another person like him in Ayurveda.” Mr. Muraleedharan said.

Dr. G.G. Gangadharan said Dr. Warrier had brought about a sea change at the Kottakkal Arya Vaidya Sala and nurtured it into a global Ayurveda brand. Kottakkal is today a synonym for Ayurveda. “He was like my grandfather. Whenever I have gone to him for some help, he was ready to everything he could. This is how a leader should behave,” Dr. Gangadharan said.

Dr. Bhushan Patwardhan said he had interacted with Dr. Warier on the virtual space a few days before his passing. There was such an inner purity in him that anyone who met would return with inner peace. His passion for scientific research was phenomenal. His collaborative research with Dr. R.A. Mashelkar and Dr. M.S. Valiathan for the CSIR turned out to be a model for quality research and studies. NIMITLI (New Millennium Indian Technology Leadership Initiative) was inspired by their collective research and Ayurveda Vaidhya Shala was one of its partners. “I am sure his successors will continue with his mission,” Dr. Patwardhan said.

Dr. Mruthyanjaya Swamy said he was fortunate to have met Dr. Warrier when he was a student. “He was so inspirational from day one. He was a down to earth person. He did not differentiate between people, whether you are a student or someone else. Today, I can say that whatever we take today were given to us on a platter by people like Dr. Warrier,” he said.

Dr. S. Saji Kumar recalled that Dr. Warrier was an extremely humble and knowledgeable person. His pioneering efforts to popularize Ayurveda throughout the world will be gratefully remembered. A philosopher and scholar, he will always remain the guiding light for generations. He deep knowledge, passion, sincerity, humility and hard work had won him many admirers. These qualities also helped him win an extra ordinary amount of trust from anyone who came into contact with him.

Mr. Sajeev Kurup said Dr. Warrier’s demise is a loss for all systems of medicine and not just Ayurveda. It is thanks to Dr. Warrier’s efforts that Ayurveda gained international recognition, he noted.

Dr. Rahmatulla recalled his visits to Arya Vaidya Sala, even as a child, with his father Dr. Alikutty for the January 13 annual seminars. “He is a rare kind of person. He would start all his speeches with reference to raagaadiroga… He has greatly inspired his fellow practitioners and the succeeding generations,” Dr. Rahmatulla said.

Dr. Nattuvally Jayachandran pointed out that for Dr. Warrier, treatment was about an attitude. He had deep interest in matters connected with society, economy and politics. His simplicity is a model for the younger generation. He contributed immensely without any selfish interest. He will be remembered as an icon of Ayurveda and a legend as times goes by, Dr. Jayachandran said.

Dr. Hareendran Nair said Dr. Warrier lived for the betterment of the Ayurvedic treatment system and knowledge. He was a man with vision and a mission. His vision was to make Ayurveda acceptable to everyone globally. And his mission was to lay the foundation for the next generation. He was always for promoting Ayurveda for the common man. He used to read the Ashtanga Hridaya every day. He was instrumental in modernizing manufacture of Ayurveda products without losing the basics of the healing science.

Dr. Sudhir Bagga said he had met Dr. Warrier as part of his quest to integrate all medical systems. “He was very kind and discussed and understood what I was doing and encouraged his other wards to support my initiative. He was a wonderful human being and, thanks to people like him, I truly believe in the integration of all medical systems,” Dr. Bagga said.

Jeevan Germany: He was everything, a friend and a teacher. He was committed to his principles would not send me medicines as Ayurvedic preparations. Was insistent on as Ayurveda medicines

Vaid Rajan Patankar also recalled that his only meeting Dr. Warrier had presented before him a down to earth person. The interaction proved quite productive and encouraging, he remembered.

Ms. Sandhya had no doubt that Dr. Warrier would be celebrated alongside the Ayurveda Acharyaas in the years to come.

Wrapping up the event, chief anchor of the remembrance meeting Dr. Madan Thangavelu said there was a personal dimension to his own memories about Dr. Warrier as his father and Dr. Warrier were born in the same year, their birthdays were apart by just 16 days. His mother’s uncle was in the Ayurveda space too and had set up the Institute of Indigenous Medicine in Colombo.

His first opportunity to meet Dr. Warrier came at Delhi. He met him again later on his 90th birthday. “Here was a man who transformed an institution single-handedly. He touched our lives in very invisible ways. Which means we have a lot of work to do,” he said and added that the thoughts about Dr. Warrier expressed by the speakers should be collected in a volume.