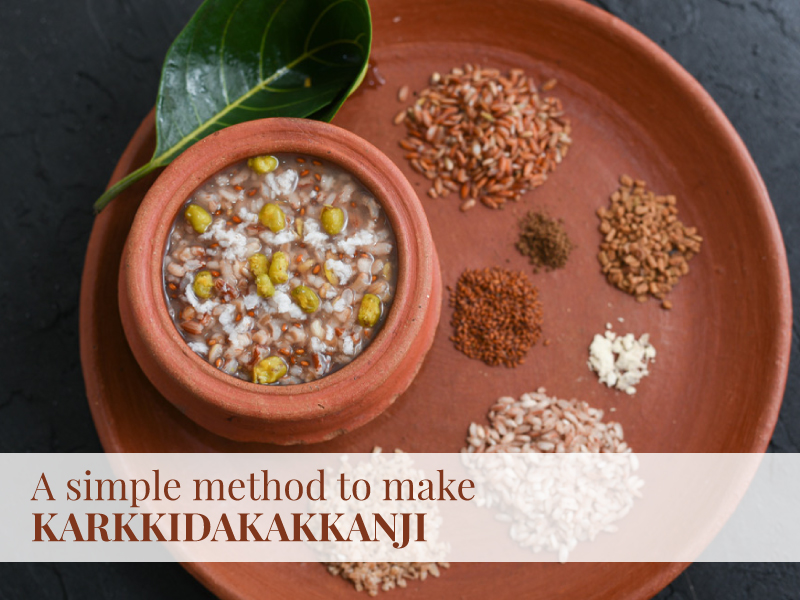 A SIMPLE METHOD TO MAKE KARKKIDAKAKKANJI

Karkidakam is a month of ailments and misery. According to Ayurveda, all these stem from the imbalance of tridoshas which reduces the innate immunity of the body, making it susceptible to diseases. The process of digestion also will be affected which again makes the body weak. So, the amount of food-intake must be reduced and at the same time, the nutritional value must be increased. Traditionally, the medicinal porridge known by the name ‘Karkkidakakkaji’ prepared at homes serves this purpose. It formed the crucial part of Karkkidaka chikitsa or Karkkidaka Therapy, the main objective of which was rejuvenating the body.

Karkkidakakkaji also known by other names such as Marunnu kanji or Oushadha kanji was prepared with easily digestible cereals, spices and herbs. The ingredients of the porridge vary with availability of herbs which in turn is determined by the locality. It is believed that ‘single dose’ can keep the body high in immunity for the entire year ahead. There are various methods and recipes to which the Ayurvedic practitioners as well as local peoples have different formulae and view-points. Some believe that just 3 days of consuming it is enough, some say, it must be for a week, and some others, take it for the whole month.

Ultimately, Karkkidakakkaji is a form of ‘Kitchen Medicine’ (Adukkalavaidyam) and it is kind of ethnic knowledge that remain within communities. Karkkidakakkaji can serve as an excellent source of vitamins and minerals along with dietary fibers, proteins and carbohydrate. It is supposed to be the most ideal food for those having hyper-cholesterolemia, obesity, arthritis, diabetes and various ailments like lumbar and cervical spondylosis. The major rice used is a special type called ‘Njavara’ which is easy to digest.  It is advised to prepare freshly on all days and it is customary that it should be served hot. ‘Karkkidakakkaji’ has other advantages of normal rice-porridge also. It can eliminate thirst, hunger, abdominal discomfort and tiredness.

Traditionally, as per the original custom, a total of 87 plants are to be used for the preparation of Karkkidakakkaji. Njavara rice is the prime ingredient which is said to be highly nutritional with anti-diabetic and antioxidant properties. All the fresh ingredients are chopped and crushed to get the extract. It is then mixed with equal amount of water and left to boil. Njavara rice, green gram, fenugreek, other ingredients and spices are added to the boiling extract and cooked well. Then coconut milk is added to the mixture and served hot. To evade the bitterness, salt, palm jaggery or shallots fried in fresh ghee can be added.

Boil 1 glass of water with 10g of Balamoola Churna and then add 100g of Shashtikashali (Njavara Rice) and 10g of Green Gram (Mung Bean) to it. Continue boiling by adding 10g of Jeeraka (Cumin), 10g of Uluva (Fenugreek), broken wheat, 10g of Chandrashoora (Halo Seed: Lepidium sativum), and 5g of Panchakola Churna. Once the rice gets cooked, add Dashapushpa Swarasa along with sufficient quantity of coconut milk.  Saindhava Lavana (Rock Salt) or palm jaggery can be added to reduce the bitter taste. This method was documented in Journal of Ayurveda and Integrated Medicines (Vol. 5, Issue 6, Nov-Dec 2020) by Dr. Sneha Shaji and Dr. Namita D.K.