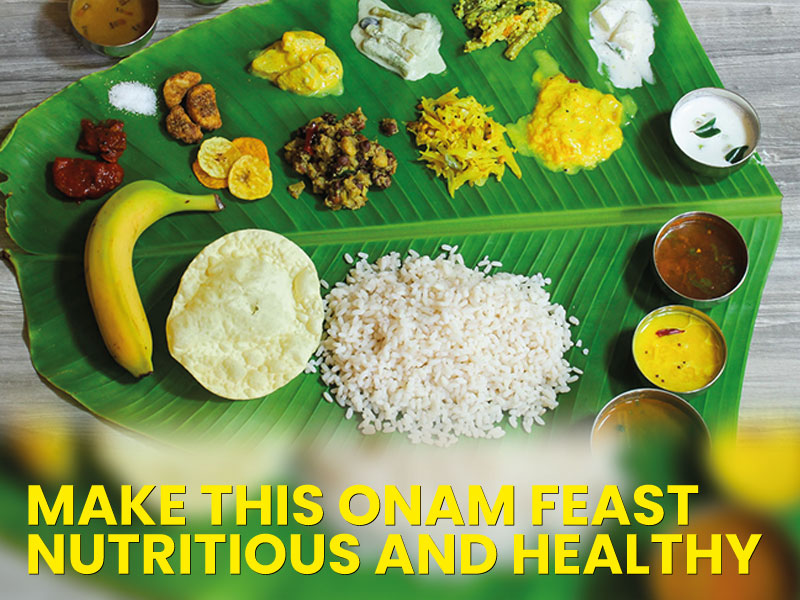 (One should stick to a diet that provides basic nutrition to the body and helps one keep it healthy. Such a diet can prevent the incidence of diseases: Charaka Samhita: Sutra Sthana: 5).

The Onam feast, which Malayalis call Onasadhya, is the high point of Onam festivities, something that lingers on one’s tastebuds years after that luminous experience of a colourful Onam.

Onam is incomplete without the feast and therefore the saying ‘Kaanam vittum Oanam unnanam’, which literally translates to ‘Must have the Onam feast even if it means pawning off the last asset’.

Onam feast is a ritual from start to finish, from the moment the first vegetable is cut to the moment when the sweetness of ‘paayasam’ (Hindi: Kheer; Punjabi: Phirni), takes it to a sweet crescendo.

Preparation of the feast itself a festive affair, all the members of the family joining hands to prepare the dishes. Onasadhya is a sumptuous spread consisting mostly of traditional Kerala vegetarian dishes, each bringing with it a taste of its own and contributing to the nutritional value of the feast as whole.

Ayurveda recognises such food items as nutraceuticals which are variously classified such as Rasayana (food that can avert the degenerative changes caused by ageing) and Jeevaniya (maintaining the joie-de-vivre).

The concept of nutraceuticals as advocated by Charaka categorizes all food items into twelve classes: corns with bristles, pulses or legumes, meat, leafy vegetables, fruit, vegetables which are to be consumed raw, wines, water from different sources, milk and milk products, products of sugarcane, oils and salts, and other subcategories of these major classes. It is interesting to note that even the daily consumption of specific food products has certain specifications mentioned under Aajasrika, which can offer protection from internal and external stress factors.

The usage of nutraceuticals is determined based on the age of the person, season of consumption and physiological conditions of the body. Ayurveda states that health of a person is dependent on Vata, Pitta and Kapha, the predominance and levels of which determine the Prakruti (physical characteristics) of a person.

Onasadhya, its preparation and ingredients used depicts the close links that existed between the people of Kerala and the local flora. Even common people were well aware of the nutritional value of the indigenous plants.

Let’s take a look at the nutritional value of certain traditional dishes served as part of Onasadhya.

Parippu represent the main ‘starter’ of the Onam-feast. It is also customary to pour ghee over this. Parippu is to be served over the ‘steaming rice! That also is a traditional practice. Parippu or Dal, as it is known in North India is believed to be brought to Kerala along with the arrival of the Aryans.

For preparing Parippu curry, split form of Green Gram (Cherupayar) is heated in an alloy vessel and then cooked with enough water mixed with turmeric powder and salt. Press thoroughly to make it a paste while still in flame. To this, Coconut well ground with Cumin seeds and Garlic are added. This can be mixed with Coconut oil seasoned with Curry leaves.

Nutritional Value: Green Gram is a very rich in protein and it contains reasonable amount of Iron. Studies have found that Iron-deficiency is very common where people are not using Green Gram (CAB International, 1989).

Inchikkari, otherwise known as Injippuli or Puliyinji is more or less like a pickle and it has its origin in Tamil Nadu. The role of Inchikkari is “to make a way to the feast” which is basically an appetizer made with a mix of Ginger (Inchi) and jaggery cooked in groundnut oil. It can also be made as a combination of curd and Ginger which is a local variation of the same.

Phosphorus and Potassium. The high sodium and potassium ratio found in Ginger has a role in reducing high blood pressure.  However, Ginger is low in Calcium which is very much needed for the integrity of bones.  The level of Manganese, Zinc and Copper  is moderately lower in Ginger and so there need not be a fear for

toxicity due to these minerals.

Nutritional Value: Among fruits, banana is valued for potassium content, because of its role in maintaining blood pressure.  Potassium content is highest in Nendran (546.66  mg/100g). And it is low in Sodium which is beneficial in the prevention of high blood pressure. Yam is composed mainly of starch, with some proteins, lipids, vitamins, minerals and a wel -balanced amino acid content. Drumstick leaves and fruit are the richest source of β-carotene and so it can be a good source of vitamin A.

Olan is a true-Kerala dish, the main ingredient of which is Wax Gourd (Kumbalanga). It is cut into square pieces and cooked along with Red Cowpeas (Vanpayar), which is to be put in water one day in advance, to get it soaked. The Cowpea is cut into small pieces along with green chillies and cooked with the White Gourd pieces. This can be then mixed with coconut oil seasoned with the curry leaves. In certain places of Kerala, coconut milk is also mixed with this.

Nutritional Value: Potassium and Calcium present in Wax Gourd play a beneficial role in maintaining electrolytic balance of body. It can be alkalinizing the body also. Though Red Cowpea is a rich source of Ascorbic Acid (Vitamin-C), β-carotene, Iron and Calcium prolonged cooking or pressure cooking can result in significant loss of them.

Kaalan is another true-Kerala dish, which forms part of the Onam-feast. The main ingredients of Kaalan are Yam (Chena), Banana (Nenthran variety) and curd. Curd mixed with water and Turmeric powder is heat-dried with green chillies. When it is dried enough coconut ground well with Cumin seeds is added. This is to be mixed with Coconut oil seasoned with Mustard seeds, Fenugreek seeds, and dried Red Chillies. Curry leaves and Fenugreek seed-powder is added and stirred. This is to be kept in flame and then removed after adding salt.

Nutritional Value: The beneficial aspects of Yam and Nenthran are already mentioned. Cumin seed is found to exhibit promising activity against Shigella infection. The extract of seeds is reported to exhibit anti-ulcer activity by decreasing the volume of acid in gastric juice.

Erissery also is a true-Kerala dish, the main ingredient of which is Pumkin (Mathanga). The next main constituent is Red Cowpeas (Vanpayar) which is to be thoroughly pre-cooked and used. Pumkin is cut into pieces and cooked to which ground Coconut mixed with Cumin seeds and Garlic are added. This can be mixed with Coconut oil seasoned with Mustard seeds, Onion and Curry leaves. This is again fried with ground Coconut to which pre-cooked Red Cowpea pieces mixed with Turmeric and Chilli powder is added. Salt is added for taste.

Nutritional Value: Pumpkin is high in calcium and potassium as well as low in sodium  which makes it a  suitable food for preventing osteoporosis and hypertension in middle-aged and aged people. Pumpkin  is  superior  to  any  other  vegetable  in  chrome  (Cr)  content which  is  essential  to  advance  the  activity  of  insulin .

Kichadi is curry which is sweet in taste and so it attains a special place in Onam-feast. Ripe Mango or Grapes is used to get sweetness. Mango fruit is cut into pieces and cooked with Turmeric powder and Green Chillies added. A little amount of Sugarcane jaggery also can be added.  Desiccated coconut, ground well with Cumin seeds, is added to this and salt is added to taste. This is to be mixed with Coconut oil seasoned with Mustard seeds, dried Red Chillies and Curry leaves.

Nutritional Value: The nutritional value of mango as a source of vitamin C and pro-vitamin A also should be emphasized but during heating the vitamins will be lost. Mango is acidic due to the presence of citric and malic acids. Mango may provide enough amount of essential minerals for human health, such as calcium, iron, magnesium, phosphorus, potassium, sodium, zinc, copper, manganese, and selenium.

Pachadi is sour in taste and so it also attains a special place in Onam-feast due to that taste. The main ingredient of Pachadi is Ladies finger (Vendaykka). The Ladies finger fruits are cut into narrow slices along with Green Chillies which is to be fried in Coconut oil. Coconut well ground with Cumin seeds and Mustard seeds are cooked in low flame and then the fried mix of Ladies finger is added along with salt. To this mixture, curd is added and the flame is cut off. Ladies finger can be replaced with Bitter Gourd (Pavaykka) or Beet Root.

Nutritional Value: Ladies finger is an important source of fibres, carbohydrate, minerals and vitamins. K, Na, Mg and Ca were found to be the main elements, with Fe, Zn, Mn and Ni. The lectin present in Ladies finger has a gastro-protective effect. Polysaccharide found in immature fruits have activities against Helicobacter pylori. Ladies finger can also function as a dietary therapy for hyperglycemia. It can reduce the amount of cholesterol and therefore decreases the chance of getting heart disease. Ladies finger is full of foliate which is a vital substance for optimum pregnancy.

Paayasam is a common title for a kind of loose pudding with which the feast ends as it is typically served as a dessert. Paayasam is actually the name of the preparation that is ready when the broth gets boiled once. For a broth boiled twice, there is another name: Pradhaman.

It is made by boiling milk, sugar, and rice, although rice may be substituted with one of the following: bulgur wheat, millet, tapioca, vermicelli, or sweet corn. It is typically flavoured with desiccated coconut, cardamom, raisins, saffron, cashews, pistachios, almonds, or other dry fruits and nuts.