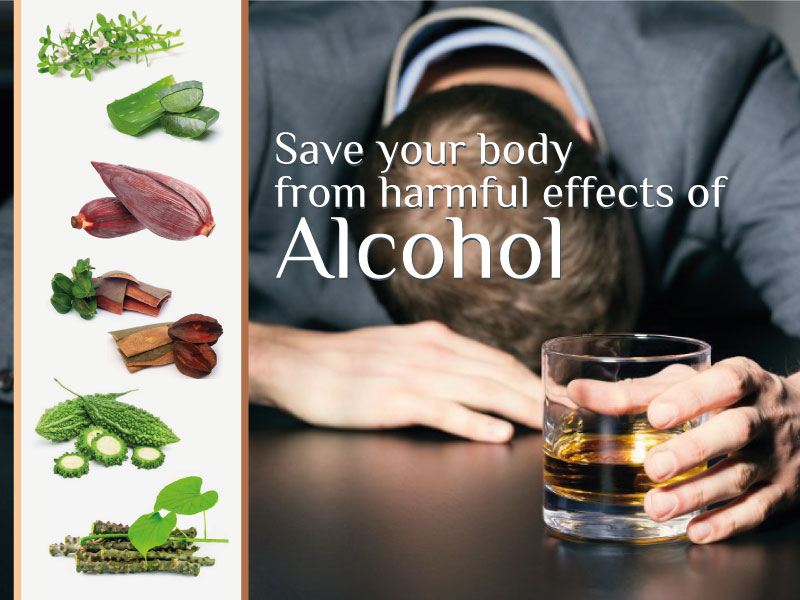 Save your body from harmful effects of alcohol

Alcoholic beverages are widely consumed around the world. During festive seasons, the rate of alcoholic consumption would hit new peaks. India has been witnessing a massive rise in alcohol consumption.

As a result, alcoholism has emerged as a serious public health hazard. At the same time, only a few are aware of the fact that alcohol and its metabolite acetaldehyde are extremely toxic and harmful to the liver and associated organs of the body.

There are a wide variety of synthetic drugs available for treating the adverse effects of alcoholism. But these drugs have side effects that can result in behavioural changes in the person consuming alcohol.

However, including some natural products such as medicinal herbs, fruits and vegetables as dietary supplements can prevent as well as cure the health problems caused by alcohol consumption.

How Can Our Food Help?

The first step towards protecting the body against the perils of alcoholism is modification of the diet. Fruits such as blueberry, blackberry, raspberry, orange, apple etc., along with dried plum, raisins (dried grapes), must form a major part of the food items we consume.

If you are already having these, their amount must be increased. Fresh fruits are rich in anti-oxidants which are inevitable to maintain the health of the liver.

Fruits like apple also have the ability to remove heavy metal residues accumulating in the intestine. Onion and garlic are rich in sulphur and can help the liver in detoxifying the body.

The ‘toxins’ entering the body can be from the food additives like ‘Ajinomoto’, mercuric compounds, synthetic hormones etc. Vegetables like broccoli, cauliflower, cabbage, beetroot and sprouted grams are rich in enzymes that can strengthen the detoxifying functions of the liver.

Glucose is needed for the body to derive energy, but excess glucose will be converted to fat and stored in the body. This can impair the functioning of glands such as the liver. An alcoholic person, whose liver over-worked detoxifying alcohol, must take extreme care to protect the liver from damage. Packaged drinks which contain high quantities of sweeteners and preservatives must be avoided.

In addition to the above precautions, the following natural remedies can well maintain the health in alcoholic persons and also those who are recovering from the ill-effects of alcohol:

Minced banana-flower or banana-stem can be used in soups or salads. It can be also fried in oil, seasoned with mustard seeds, to which fenugreek, onion, coriander powder, cumin seeds and curry leaves can be added. This can be taken as a dish with salt and pepper. This preparation is good for alcoholics, diabetic patients and for the health of uterus in women.

Bitter gourd, popularly known in Malayalam as Pavaykka or Kayppanga contains therapeutic compounds like momordicoside and p-methoxybenzoic acid which are proved to be efficient in the treatment of neurodegenerative diseases, diabetes, inflammation, viral infections, autoimmune diseases and disorders of the digestive system.

The pulp of Aloe vera, known in Malayalam as Kattaarvazha, contains molecules of glucose and mannose as linear chains, in which mannose is more concentrated than glucose. It also contains Anthraquinone, Aloesin, and Aloe emodin which is an oxidative product of Aloin. The gel of Aloe vera helps to strengthen the liver and improves its functions.

Brahmi (Bacopa monnieri) known as kapotavanka in Sanskrit, contains alkaloids lie brahmin, saponin, nicotine, herpestine, betulic acid, stigmastarol, beta-setosterol, bacosides and nacopasaponins. It is traditionally used to enhance three basic functions of the brain, such as, the power of learning, power of retention and power of recall.

However, it is also astringent, anticonvulsant, anti-inflammatory, analgesic, antipyretic and antiepileptic and can alleviate menstrual pain. Brahmi is also a powerful remedy for the treatment of addiction to alcohol. It can reduce the cravings and calm the emotional eruptions which occur during the ‘withdrawal period’.

For this, Brahmi-powder can be taken along with ghee or tea: (Deepali Mathur, et al.,. The Molecular Links of Re- Emerging Therapy: A Review of Evidence of Brahmi (Bacopa monniera). Frontiers in Pharmacology Ethnopharmacology).

Known in Sanskrit as Amrita and Chittamruthu in Malayalam, Giloy (Tinospora cordifolia) extract has well-proved hepato-protective effect against alcoholism. It can lower the levels of FAAs (fatty acid amides) and can protect the liver by reducing the levels of liver-specific enzymes and lipids. It can also have an effect on the brain and nervous system of the addicted person through its intervention in dopamine metabolism.

As a treatment for alcoholism-induced health problems, the stem of Giloy cut into the length of one inch can be put in a glass of water, kept overnight (8 hours) and then taken in empty stomach. The juice of the stem (10-15 ml) mixed with honey and regularly taken also can give the same effect: (Soham Saha, and Shyamasree Ghosh. Tinospora cordifolia: One plant, many roles. Ancient Science of Life, PMC, Wolters Kluwer, Medknow Publication, April 2012; 31(4): 151- 159).

Known in Sanskrit as Dhavala, Arjuna is known to Keralites as Neermaruthu (Terminalia Arjuna). It is a mighty tree, the bark of which is used as medicine. The stem-bark contains includes arjunic acid, tannins, arjunones, betullinic acid and ellagic acid.

The bark powder (1 to 3g), boiled in water and milk, can be taken two to three times a day. The bark, if collected directly from the tree, it must be taken as strips of 25 cm in length and 5 cm in width. This must be dried in shade, in places with enough aeration. The bark should then be powdered and mixed with milk at the rate of 10 g with added honey for sweetness. It can be taken in empty stomach with buttermilk. (Amol A. Dambal. Terminalia arjuna: Phytochemistry, pharmacognosy and pharmacological studies. Pharmatutor Pharmacy Infopedia).