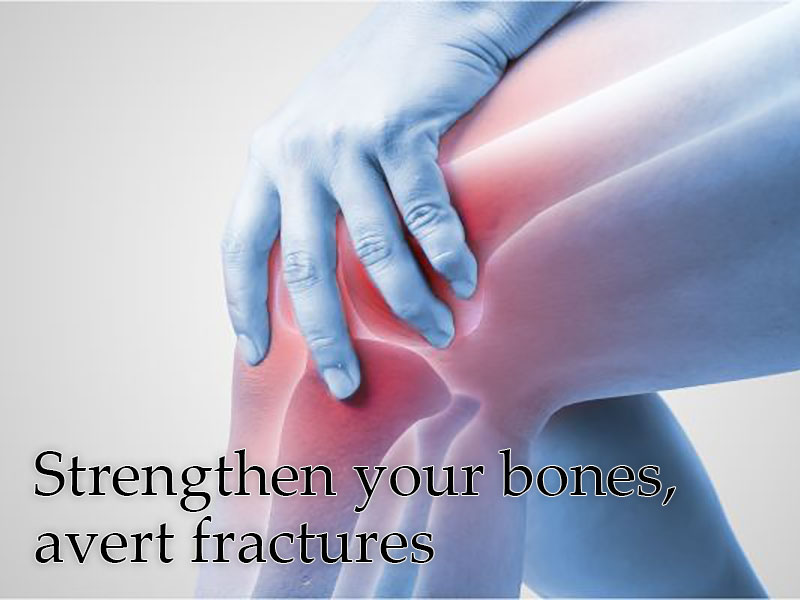 According to Ayurveda, maintaining the structural frame work of the body (sarira) is a function of asthidhātu which gives shape to the body and protects the vital organs. At the same time, asthidhatu is the seat of Vatadosha, which means that Asthi and Vata are reciprocal to each other.

Charakasmahita, the ancient text in Ayurveda, describes 18 types of Asthikshaya, which is known commonly today as Osteoporosis. It is a systemic skeletal disease characterized by low bone mass and deterioration of bone tissues. This can lead to fragility and fracture of the bones. As per recent estimates, more than 8.9 million bone-fractures happen annually due to osteoporosis.

Osteoporosis can affect both the genders, but it is more prevalent among women, particularly after menopause. It affects about 200 million women worldwide. And it is interesting to note that more than half of hip fractures due to osteoporosis occurs in Asia.

Osteoporosis is the second most common metabolic bone disease in India. However, still many of us do not know that osteoporosis can be prevented if we can take some early interventional steps through diet and lifestyle. There are also some herbs which can nourish our bones. The importance of herbs is that they are safe (without side-effects) and cost-effective than modern medicines.

Food habits can be the main factor behind bone ill-health. Adopting a balanced diet, rich in nutrients, minerals, and vitamins can help you to maintain good bone health. It is important to note that chronic vegetarian diet can lead to problems like osteoporosis. In addition to this, impaired action of certain hormones, pregnancy and lactation, lack of exercise, and various diseases (such as bronchial asthma, anorexia nervosa, etc.) can affect the healthy nature of bones.

A diet having low calcium, magnesium and vitamin-D, smoking or use of tobacco in any form, alcoholism, Caucasian racial features, surgical menopause, use of steroids, etc., can also contribute to bone-ill health.

Milk and other dairy products are the best source of calcium. Green leafy vegetables like spinach also contain significant amount of Calcium. Broccoli, almonds, legumes are rich sources of calcium. However, the main source of Calcium is seafood. Those who cannot opt for seafood can replace them with dairy and fortified foods (e.g., orange juice, tofu, and soy milk) as their Calcium content is in twice that in green vegetables.

Also known as calciferol, Vitamin D has two major forms: D2 and D3. Absorption of calcium from the intestinal tract and the re-absorption of calcium by the kidney is based mainly by the action of calcitriol (active vitamin D). So, deficiency of Vitamin D reduces calcium absorption from the intestinal tract and the kidneys and increases parathyroid hormone concentration, which can lead to weakening of the bones (osteolysis) and bone-fracture.

Phosphorus is another component of the bone. It is found in almost all food, but a daily intake of 1000-1200mg must be ensured. However, chronic, greater than calcium, intake of phosphorus can lead to bone loss. Copper is an important factor that ensures the smooth functioning of many enzymes that are involved in the formation of the physical components of the bone.

Copper deficiency can lead to disorders of cartilages and bones. Similarly, Zinc is a co-factor for many proteins involved in the development of bones and Manganese that for many enzymes involved in maintaining the ‘quality’ of bones. Vegetarians often consume lower amounts of phosphorus, Zinc, Copper, Vitamin B12 and Vitamin K, all nutrients that have an effect on bone health.

Reduced Vitamin K can cause reduction in bone density and increase the risk of bone-fractures. It is necessary for blood coagulation and for actions which potentiate the bone against arthritis, diabetes and wrinkles. Vitamin K exists in various foods, though in small quantities, with the exception of leafy vegetables that have dark green colour. The vegetables richest in vitamin K are cabbage, spinach, beetroot, broccoli, and cauliflower. On the other hand, Vitamin C is essential for the hydroxylation of bone collagen.

Coffee is produced from fried and powdered seeds of coffee plant. Caffeine (1,3,7-trimethylxanthine) is a chief component of coffee which is also present in tea and caffeinated soft drinks.

Regular consumption of coffee has been reported to exert some negative effects on the skeletal system and can increase the threat for osteoporosis (A. Cano-Marquina, J. J. Tarin and A.

Cano: The impact of coffee on health. Maturitas, 75, 7-21 (2013). Caffeine can increase the risk of hip fractures also, another study has found, as it can negatively influence calcium retention.

Regular intake of caffeine has been linked to enhanced calcium excretion and thereby negatively reducing the effectiveness of calcium absorption causing effective loss of nearly 4 to 6 mg of Calcium with single cup of coffee.

Almost all fruits and vegetables contain Potassium which can ensure bone density. This is because such a diet ‘rich in alkali’ can safeguard the bone by neutralizing the effect caused by the emergency release of alkali salts from the bone itself.

Researchers have found that potassium salts can maintain the level of calcium and reduce the weakening of the bone. Here we will see some of the common herbs and fruits that can help us to maintain good health of the bones and skeletal system.

Turmeric, known in Malayalam as Manjal is referred to as Aneshtasharvari in Ayurveda. Traditionally, turmeric is used to ensure proper development and health of bones and to alleviate joint-pain. It is also proved to be efficient in boosting immunity and memory in children.

A simple home remedy for this is ‘Turmeric Milk’ which can be prepared by boiling about 350 ml of milk to which a quarter teaspoon turmeric powder, along with a pinch of pepper, can be added. Once the mix boils, add two drops of ghee leave it to cool down. When it is cool enough to drink, one table spoon of honey can also be added.

Clinical trials have proved that isoflavones from Soybean have positive effects on the mechanical strength of bones in postmenopausal women. Even a 22% of Soybean-protein in diet is equivalent to daily estrogen administration needed to improve weakening of bone.

For those who are vegetarians, the place of animal protein in the diet can be taken over by Soy foods. Among Asian women, consumption of Soy-related foods is found to improve the health of bones. Moreover, Soy protein intake decreases calcium excretion when compared to meat and dairy protein.

The fruits of Drumstick Tree (Muringa in Malayalam) are a good source of Calcium and Phosphorus. Both of these are inevitable for the development of bones and so consuming Drumstick fruits regularly can prevent the occurrence of arthritis and osteoporosis. The leaves of the Drumstick tree also are rich source of protein, Vitamins like A, B-6, C, Riboflavin and minerals like iron, magnesium, and manganese.

In addition to this, it contains plenty of anti-oxidants which can scavenge the oxygen free radicals. This is very crucial for maintaining the health of bones. Studies have proved that leaf extract of Drumstick Tree possesses immune-modulatory activity and can be used to boost the immune system. These functions make Drumstick an important therapeutic agent for various bone related disorders (C. Patel, A. Rangrez and P. Parikh: The anti-osteoporotic effect of Moringa oliefera on osteoblastic cells: SaOS 2. Journal of Pharma and Bio Sciences, 5, 10-7, 2013).

Pomegranates (Punica granatum) known as Mathalam in Malayalam are used for making fresh juice, baking, meal garnishes, smoothies and alcoholic beverages. The seeds of Pomegranate contain coumoestrol and comesten which can function as ‘phytoestrogens’. The fruit contains some other estrogenic compounds such as quercetin, estrone, luteolin, kaempferol and estradiol which can help in bone formation and prevent weakening of bones.

Experiments done in rats have found that pomegranate-juice is effective for the treatment of the symptoms of menopause. Some studies have proved that the presence of the estrogenic compounds in pomegranate can encourage the formation of cartilages (S. Sahabjada and M. Arshad: Osteogenic potential of Punica granatum through matrix mineralization, cell cycle progression and runx2 gene expression in primary rat osteoblasts. DARU, 22, 72, 2014).

Bhringraj (Eclipta prostrata) is a common herb that grows near riversides which is so popular among Keralites by the name Kayyonni. Though it is a well known ingredient of herbal hair-oils, an active compound known by the name ‘wedelolactone’ from it has been recently identified to be involved in regulating the health of bones (Y. Q. Liu, et al., Wedelolactone enhances osteoblastoge-nesis by regulating Wnt/ß-catenin signalling pathway but suppresses osteo-clastogenesis by NF-kB/cfos/NFATc1 pathway. Scientific Reports (Nature) 6, 32260 (2016).

The whole extract of the plant is made into a special preparation along with goat-liver as a rejuvenating treatment towards damaged muscles and internal organs due to physical injury. Fresh extract of the whole plant also can be taken at the dose of one tablespoon everyday as health tonic which can also boost immunity power of the body. Fresh extract of leaves ground with Sesame (Ellu) in water, if used for gargling can make protect tooth from loosening of the gums.

Known in English as Liquorice and madhu-yashtikam in Sanskrit, Irattimadhuram has the active component in its roots. Chemically classified as an isoflavinoid, it can structurally mimic beta-estradiol which is related to estrogen, the female hormone. So, Liquorice is also nown as ‘phytoestrogen’. This has a beneficial effect on osteoarthritis and it can also help in the treatment of osteoporosis in post-menopausal women (J. K. Pru: The bone-promoting actions of formononetin in established osteopenia. Menopause, 19, 843-844, 2012).

In women who have delivered more or in those who have removed their uterus, the amount of ‘estrogen’, the female hormone, will be gradually reduced. This can aggravate the susceptibility to osteoporosis or weakening of the bone. So, a normal fall can be fatal, as it can lead to grave fractures. The powdered form of Liquorice mixed with one table spoon honey, if taken regularly, can rescue post-menopausal women from such hazards.

Known as Devil's backbone in English, popular by the name Changalamparanda in Malayalam is traditionally used to repair broken bones in Ayurveda, which is evident from its Sanskrit name Asthi-samharaka or Vajravalli (Cissus quadrangularis). It is reported to be one of the most important herbal medicines for osteoporosis (H. R. Brahmkshatriya, et al., Clinical evaluation of Cissus quadrangularis as osteogenic agent in maxillofacial fracture: A pilot study. Ayu, 36,169 (2015).

It is a rich source of Calcium which can made into a side-dish in the following way: Fry seeds of black gram, mustard in oil and add red chillies and asafoetida powder to it. The stem of Changalamparanda removed off its skin and sliced as small pieces are then added to it, when the contents in oil are enough fried. This must be stirred thoroughly for some time and then ground with salt and tamarind added. Ginger and curry-leaves also are added and this can be served as Changalamparanda-Chammanthi. For menstrual pain, sun-dried stem of Changalamparanda powdered is taken internally with tamarind and salt. The stem-juice (also of leaves) mixed with equal quantity of honey can be used to alleviate mensus-related problems. Crushed stem fastened to points of broken bones can heal them quickly.