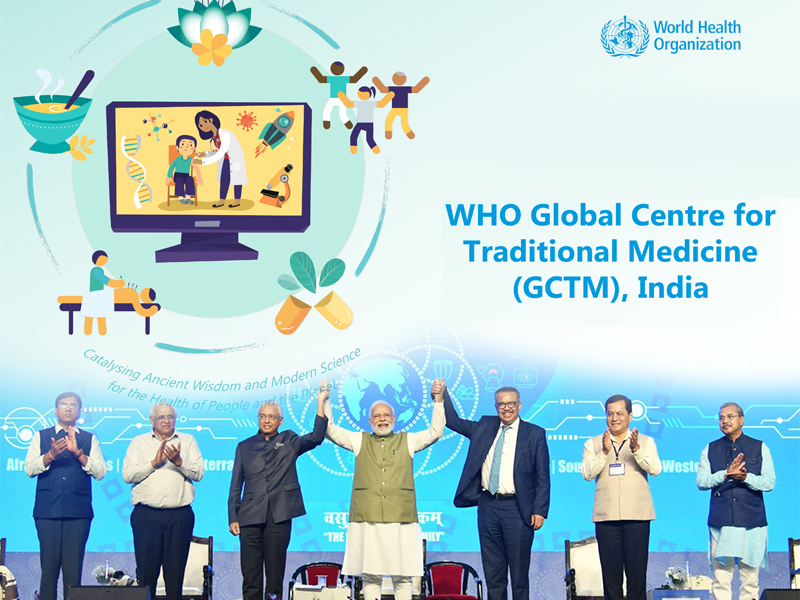 WHO to set up Global Centre for Traditional Medicine in India

Kochi: The World Health Organisation (WHO) is establishing a Global Centre for Traditional Medicine (GCTM) at Jamnagar in the Indian state of Gujarat.

GCTM will be the first and only global outpost centre for traditional medicine across the world and is expected to emerge as an international hub of global wellness.

The new centre focuses on four main strategic areas: evidence and learning; data and analytics; sustainability and equity; and innovation and technology to optimize the contribution of traditional medicine to global health and sustainable development.

Noting the rising global demand and investment in the Ayush products, Dr Tedros said, the whole world is coming to India and India is going to the whole world.

He emphasized long-term investment in innovation ecosystem in health in general and traditional medicines in particular; developing traditional medicines by innovators, industry and government in environmentally sustainable and equitable manner and protecting the interest of the communities that developed these traditions. The latter should also benefit when these medicines are brought to the market, including by sharing the fruits of intellectual property.

“For many millions of people around the world, traditional medicine is the first port of call to treat many diseases,” said Dr Tedros. “Ensuring all people have access to safe and effective treatment is an essential part of WHO’s mission, and this new center will help to harness the power of science to strengthen the evidence base for traditional medicine. I’m grateful to the Government of India for its support, and we look forward to making it a success.”

By setting up the global knowledge centre for traditional medicine, supported by an investment of USD 250 million from India Government, the WHO aims to harness the potential of traditional medicine from across the world through modern science and technology to improve the health of people across countries.

Traditional medicine is also increasingly prominent in the world of modern science. Some 40% of approved pharmaceutical products in use today derive from natural substances, highlighting the vital importance of conserving biodiversity and sustainability. For example, the discovery of aspirin drew on traditional medicine formulations using the bark of the willow tree. The contraceptive pill was developed from the roots of wild yam plants and child cancer treatments have been based on the rosy periwinkle. Nobel-prize winning research on artemisinin for malaria control started with a review of ancient Chinese medicine texts.

There has been a rapid modernization of the ways traditional medicine is being studied. Artificial intelligence is now used to map evidence and trends in traditional medicine and to screen natural products for pharmacokinetic properties. Functional magnetic resonance imaging is used to study brain activity and the relaxation response that is part of some traditional medicine therapies such as meditation and yoga, which are increasingly drawn on for mental health and wellbeing in stressful times.