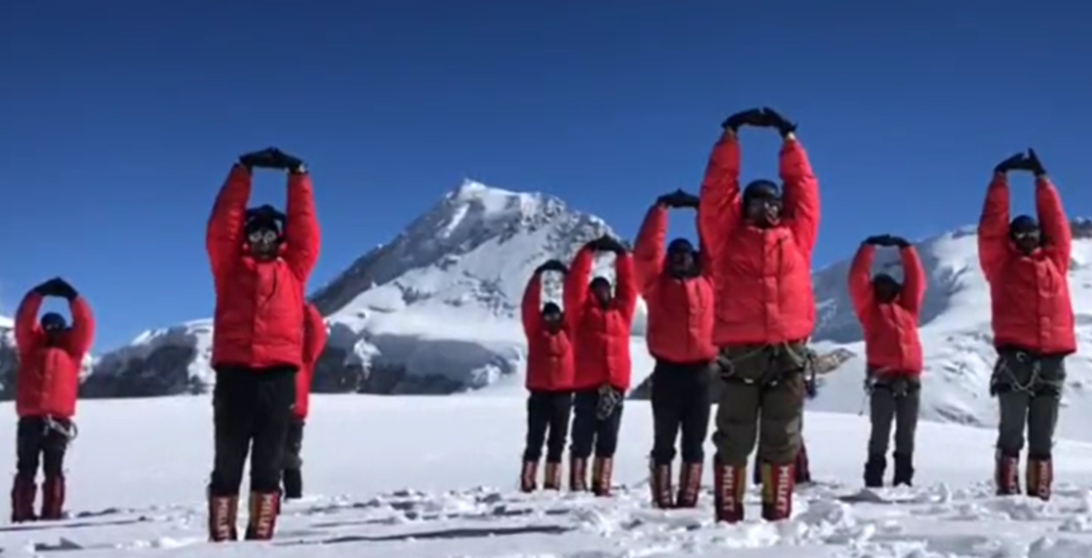 Ahead of the International Day of Yoga falling on June 21, the Indo-Tibetan Border Police (ITBP) mountaineers have created a record of sorts by practicing Yoga at a height of 22,850 feet in the Himalayas.

The 14-member team of mountaineers scaled the Mount Abi Gamin peak, situated in the Chamoli district of Uttarakhand, on June 1 and demonstrated yoga for nearly 20 minutes in extreme snow conditions.

The ITBP shared a video of the same on Twitter with the caption, "New record of practicing Yoga at high altitude by ITBP. #Himveers of ITBP demonstrate Yoga practice ahead of #InternationalDayOfYoga2022 with the theme: '#YogaforHumanity' at an altitude of 22,850 feet in snow conditions in Uttarakhand near Mount Abi Gamin.”

Abi Gamin is located in the central Himalayas at the culminating point of the Zaskar Range. It is situated on the watershed of the upper Alaknanda and Dhauli rivers between the famous Mana and Niti passes on the Indo-Tibetan border.

Earlier, the first Battalion ITBP mountaineers had performed Yoga sessions at an altitude of 15, 000 feet, also in the Uttarakhand Himalayas, on April 29.

The theme of the 8th edition of the International Day of Yoga (IDY) will be ‘Yoga for Humanity’. The main event of the IDY-2022 demonstration will be held at Mysuru, Karnataka, led by Prime Minister Narendra Modi. Pattadakal, the UNESCO World Heritage Site in the district, that houses significant Chalukya monuments of 7th and 8th century CE, will be one of the 75 cultural heritage locations across the country to host yoga programmes on July 21.

The United Nations General Assembly recognized June 21 as the International Day of Yoga at the initiative of Modi in 2014 via a unanimous vote.