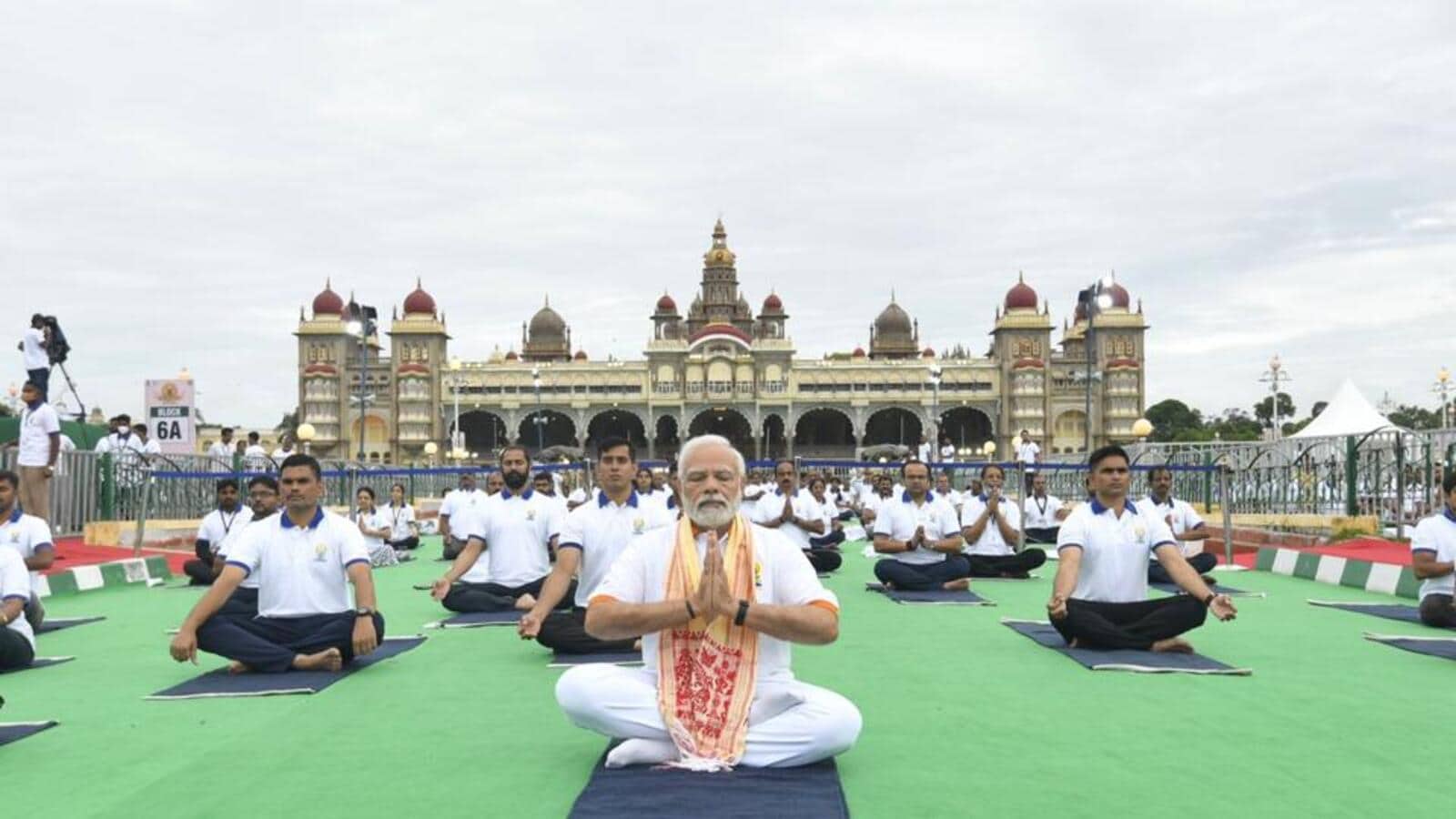 Yoga, India’s gift to the world, has become a basis for global cooperation and is providing a belief of a healthy life to humanity, Prime Minister Narendra Modi said on Tuesday while leading the ‘International Day of Yoga' celebrations in the heritage city of Mysuru in the South Indian state of Karnataka.

“Yoga has come out of the households and has spread all over the world and this is a picture of spiritual realization, and that of natural and shared human consciousness, especially in the last two years of an unprecedented pandemic,” Modi reflected in his address, soon after a mass Yoga demonstration at Mysuru Palace along with 15, 000 participants.

On the widespread acceptance of Yoga, the Prime Minister remarked that “Yoga has now become a global festival. Yoga is not only for any individual but for the entire humanity. Therefore, this time the theme of the International Day of Yoga is - Yoga for humanity.”

Mass Yoga demonstrations were organized at 75 iconic locations across the country under the leadership of 75 Union Ministers. The Prime Minister also inaugurated the Digital yoga exhibition, showcasing the latest technologies like Virtual Reality to project the history and wisdom of Yoga.

Vice President M Venkaiah Naidu said in Secunderabad that the ancient science of Yoga is India’s invaluable gift to the world and asked everyone to make Yoga part of their daily lives and reap its benefits. He also emphasized the need for undertaking further research on Yoga as a wellness solution.

Union Minister for Ayush, Ports, Shipping & Waterways Sarbananda Sonowal said Yoga has brought the world together, reshaping the global values, and is bringing different healthcare systems closer. “It’s the Prime Minister’s vision to bring world peace and harmony by focusing on the health and well-being of individuals, communities, nations, and the world as a whole.”

Union Minister for Health and Family Welfare Dr. Mansukh Mandaviya joined the celebrations from Kevadia in Gujarat. The “world has accepted our culture, tradition from time to time. Yoga is an ancient physical, mental and spiritual practice that originated in India. Our great visionary leader Prime Minister Narendra Modi had first proposed the idea of the International Day of Yoga in his address during the opening of the 69th session of the General Assembly. It was his mission that 21st June was declared as International Day of Yoga by UNGA.”

Meanwhile, the International Day of Yoga 2022 saw many new initiatives, including the ‘Guardian Ring’ program, which is a collaborative exercise between 79 countries and United Nations organizations along with Indian Missions abroad to illustrate Yoga's unifying power that surpasses national boundaries.

The UN celebrated the International Day of Yoga with leaders recognizing its potential to help heal the psychological scars of the Covid-19 pandemic and for taking the world towards environmental sustainability.

“Today could not have come at a more opportune time as the Covid-19 pandemic has upended the lives and livelihoods, triggering a deluge of anxiety and depression. The practice of yoga serves as a holistic approach to the physical, mental and spiritual health and well-being of humanity,” General Assembly President Abdulla Shahid said.

India’s Permanent Representative T.S. Tirumurti said the Yoga Day celebration was returning to the UN after two years “during which the Covid pandemic had upended the lives of people”.

“During these difficult times, millions embraced yoga as their companion to stay healthy, to overcome depression and mental anxiety in recognition of this important role of yoga, this year’s theme is ‘Yoga for Humanity’,” he said.

Meanwhile, the World Health Organisation has called on lawmakers to integrate yoga into preventive health strategies.