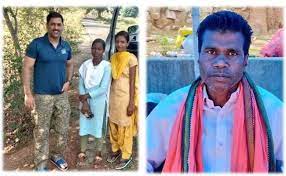 Mahendra Singh Dhoni, the two-time world cup winning former Indian captain, is known for his unique style of play on the cricket field. He proves to be no different in his real-life too.

When celebrities head overseas for expensive treatments, the Chennai Super Kings captain has put his faith in the traditional ayurvedic treatment to treat his persisting knee pain issue.

The ace cricketer, known for his strategic thinking ability and inspiring presence both on and off the field, is reportedly consulting a local Ayurvedic doctor to help him with his knee. The 40-year-old decided to take the help of Ayurvedic doctor Vandan Singh Khervar following the positive results of his parents’ treatment.

“I charge him Rs 20 as consultation fees and prescribed him medicines worth Rs 20,” Khervar was quoted as saying to NDTV.

The Ayurvedic doctor lives in the forested area of Lapung, nearly 70 km from Ranchi. He has been administering treatment to Dhoni’s parents for the past three months and the duo has gotten considerable relief. Dhoni too started availing the treatment for the knee pain, pestering him for the last several months.

At first, Khervar wasn’t aware of the legendary cricketer visiting him and realized the same when fans gathered there to have a glimpse of their cricketing hero. “He visits four times a week since last month. A huge crowd gathers at that time. So now he sits in his car while the medicine is administered to him,” the doctor was quoted as saying.